End of an era for Taranaki stud 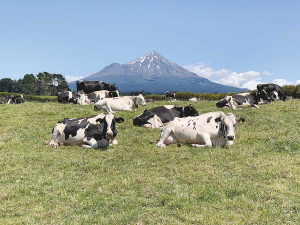 A Taranaki farmer’s 40-year commitment to breeding Holstein Friesians is set to come to an emotional end.

Ian McCormack, who’s battling a terminal illness, has decided to sell his herd at a complete dispersal sale in April.

About 180 head of mixed aged cows, in-calf heifers and calves will go under the hammer on his Stratford dairy farm.

“It’s quite emotional,” said Ian. “But the time has come for me to move on.”

“Holsteins Friesians have been my life. My herd can be traced back to the original animals imported into New Zealand.”

“It’s been my passion to maintain the purity of the breed. You won’t find too many herds left like that,” he said.

Ian milks about 120 cows on his rolling 54-hectare (effective) farm on Opunake Road. The herd produced 68,000 kgMS in 2018-19. It was one of the highest producing fat herds, of registered Holstein Friesians, in the country.

Bushview Holsteins was founded in 1980, when Ian and his brother Gerald were herd-owning sharemilkers on their parents’ Rowan Road farm.

“The stud really kicked off in 1988 with the purchase of a heifer named Snowline Poppy,” he said.

“She was from the well-known Snowline ‘P’ family, which traces back to the cow Egmontdowns OG Peggy.”

Poppy had six daughters, five were reared as replacement heifers.

“A number of her descendants are still in the herd and have all classified as very good (VG) or excellent (EX) for traits other than production,” he said.

A major focus of his breeding has been cow families, production and type. He strives for a well-balanced cow with longevity.

“You’ll see I have a few old cows in the herd that don’t look their age. They look young. I don’t think I’ve done too badly,” he said.

“I bought my first cows from that family when Nouveau Holsteins in Dargaville and Chrislerae Holsteins in Palmerston North held dispersal sales,” he said.

Taranaki ‘people power’ is modelling how all Kiwis should get out there and do stuff, says the regional council.

Taranaki reeling from too much rain

Dairy farmers living in the shadow of Mt Taranaki are doing it tough as the rain keeps on falling.

A Taranaki dairy farm has been fined $87,000 for employment breaches in a case reflecting the Labour Inspectorate’s intolerance of negligent employers.

Taranaki's latest freshwater report shows ecological health for the region's waterways are showing some of the best results ever in the past 19 years.