Stockman prefers gear that frees him for husbandry 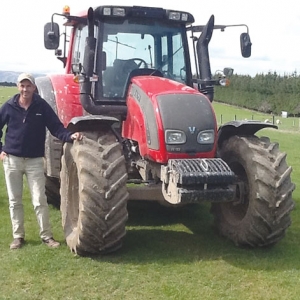 John Smith says the tractors are good value for money.

John Smith, of Wendonside, loves working with animals and is at heart a stockman. His main source of income is dairy support, and he farms Romney cross Texel sheep.

Smith says his interest in machinery is based solely on how it helps him care for his stock, and the Valtra’s – he now owns six – have served that purpose.

“I bought the first Valtra six years ago, when we first started getting into dairy support. It was good value for money, reliable and easy to drive. I’ve found that anyone can jump in and operate one without drama.”

He has since bought a new one every year.

Though the farm has three permanent workers, it is a family operation: Smith’s wife Diane runs the farm office, their three sons do most of the baling in the summer holidays and their two daughters help on the farm.

Smith started out with 400ha in the late 1970s and now farms 1220ha. Sheep alone weren’t profitable enough, so he moved into dairy support. With the dairy grazing came the need for baleage and more copping, requiring more machinery.

Smith’s tractors are Valtra N Series. These have a long wheelbase, good for loader work, and they are stable and versatile, Agco says.

“We chose mid-size tractors. That way we can have more of them and more flexibility, especially in November when we’re putting in crop and making baleage. We can also use smaller gear. And these tractors have better re-sale value than bigger ones.”

Smith’s policy is to sell a tractor after five or six years when it has done 5000 hours.

Valtra tractors are custom built to fit the needs of the buyer, but Smith tends to stick to basic models. “The last two have had more electronics but the previous ones were more basic.”

Then there are three N101s (114hp). They have loaders and move a lot of baleage and do the feeding out in winter. They also pull a 12 tonne roller, 24m sprayer and, during the baling season, one takes the mower and another takes the rake.

The newest two are an N122 and an N123 (135hp). They work a six-furrow plough and a combi baler. These two have cab suspension, “a big improvement that takes the jarring out and you don’t get thrown around as much. Any new tractor we get will now have that and loader suspension.”

Valtra has a range of transmissions. The N123 is a Hi Tech 5, with 20 forward and 20 reverse gears. They are in four ranges with five steps. The driver can manually move through the gears with the push of a switch, or can set it to automatic.

Smith bought his Valtras from JJ Ltd in Gore and he says they are one of the reasons he has stuck with Valtra.

JJs does the major 1000 hour services, Smith gets on with farming.