Pottinger on a roll 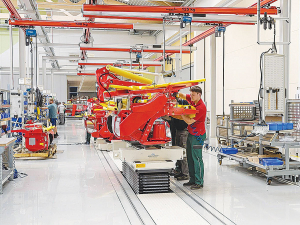 Pottinger says it has substantial order books, after a difficult 16-month period brought about by the pandemic.

Despite Covid, the need for the world to eat has kept farmers busy, meaning that they continue to buy new kit and machinery – so manufacturers are also busy.

Speaking at a virtual press launch of the new Jumbo 7000 series forage wagons, spokesman Gregor Dietachmayr, confirmed Pöttinger is very busy, with substantial order books, after a difficult 16-month period brought about by the pandemic.

“We had to be careful, even reducing our manufacturing output slightly to reduce the risk of creating too-high machine inventories, should the demand have shrunk,” said Dietachmayr. “We were surprised to find the demand for new machines actually increased.”

While the domestic market of Austria accounts for 10% of sales, exports of the remaining 90% sees Germany and France as the largest markets at 19% and 15% respectively. The product mix is built around grassland machinery at 46% of volume, tillage gear at 16%, balers and loader wagons at 15%, with drills making up 9% of the total.