OPD coming on all Oz ATVs 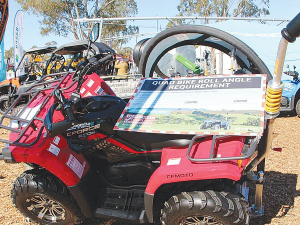 With just a month to go before all new and secondhand imported ATVs bikes sold in Australia must be fitted with operator protection devices (OPD) and meet minimum stability requirements, one in six quad bikes for sale through dealerships do not meet the new national safety standards.

State and territory consumer protection agencies have been conducting surveys to examine whether suppliers were complying with stage one requirements of the Quad Bike Safety Standard, which has been in place since October 2020.

Surveillance took place in New South Wales, Queensland, South Australia and Western Australia at dealerships which included all major quad bike brands, alongside some of the less well-known marques.

Under stage one of the Quad Bike Safety Standard, all new and imported second hand quad bikes sold in Australia must be tested for lateral static stability and have a hang tag attached to them showing the angle at which the quad bike tips onto two wheels.

They are required to carry a roll over warning label on the bike and the owner's manual must also include roll over safety information.

ACCC deputy chairman Mick Keogh said, "although roughly one in six machines, were not compliant with the safety standard, suppliers have so far cooperated with our investigations and taken steps to fix problems, including recalling non-compliant bikes where necessary".

Suppliers who fail to comply with a mandatory safety or information standard can be found guilty of a criminal offence, with a maximum fine of AU$500,000 for individuals of AU$10 million for body corporates.

When stage two comes into effect from October 11, all new and secondhand imported quad bikes sold in Australia must be fitted with operator protection devices (OPD) and meet minimum stability requirements.

These requirements have been a contentious topic for a number of years and have led to the withdrawal of several brands from the Australian quad market, with Honda, Yamaha and Suzuki planning to exit the market when stage 2 comes into force, following Polaris who have already left.

In contrast, the Australian distributor of CRMoto, Mojo Motorcycles, are one of the companies that have opted to continue supplying ATVs, meeting the stage two requirements early and fittin OPDs as standard across its entire range.