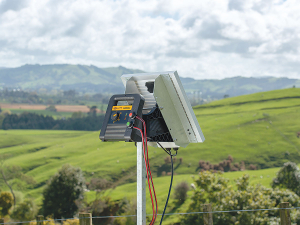 The shed has been stripped to its bones, re-clad, given a mezzanine floor and soundproofed.

Now a purpose-designed, modern building, the space will allow the Hamilton company to show existing products and introduce visitors to a raft of innovations.

These will include the new Electric Fence Dropper, launched at regional field days in February and well received by farmers. The unit allows users to extend the distance between fenceposts by introducing droppers, resulting in a much more cost-effective solution.

And the dropper keeps the integrity of the fence when, for example, managing sheep through multiple wires. The dropper ensures the wires maintain the same distance across the span to prevent animals from pushing through the fence.

The units feature a range of ‘smarts’ to help increase reliability such as better battery management, meaning the farmer can trust that stock remain under control no matter the weather conditions.

Site visitors will also get a preview of the company’s new e-Shepherd fencing due for launch later this year.

e-Shepherd is virtual fencing via a collar fitted to animals. It works via a ‘geofence’ set by a computer, ensuring the animals stay inside predetermined virtual boundaries.

Animals can be trained in three to four days using two stimuli: firstly an audible warning when the animal nears the geofence boundary, then a safe, small electric shock if the animal keeps moving towards the pre-set boundary.

As an example of its versatility, the geofencing boundaries can be moved closer and closer to a destination yard over several weeks, making the final part of the herding much easier.

Gallagher will be on site D72 at Fieldays.

For more than 50 years, the Gallagher team has made the annual pilgrimage to Mystery Creek for Fieldays.