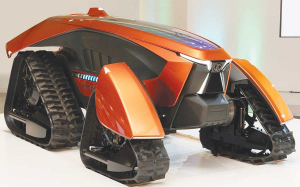 Designed to commemorate the Japanese company’s 130th anniversary, the fully autonomous, tracked machine is said to be packed with artificial intelligence and electrification technology. The layout centres around the increasingly popular use of rubber tracks at each corner, with electrical power being achieved by lithium-ion and solar batteries.

The vehicle is also able to adjust its working height to give sufficient clearance for a range of crops, while also using the same technology to “lower” itself to increase traction in difficult ground conditions.

Steering is effected by changing the speed of each electric wheel motor, said to result in a very tight turning radius The company suggests that the development of such concepts addresses the two main challenges in the Japanese agricultural sector: those of labour shortages and the increasing average age of the country’s farmers.

Massey Ferguson has announced updates on the Tier2 version of the MF 8700S, which is now available on indent orders.

With Stage V emissions regulations coming into force across Europe, Valtra has taken the opportunity to include some new features on its updated models.

A new generation of McCormick tractors, aimed at livestock operators, is now available in New Zealand.