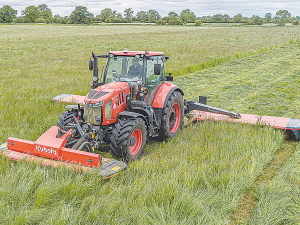 Kubota’s farm machinery sales soared in the past year.

Japanese company Kubota Corporation has reported that a solid performance by its farm and construction machinery divisions in both domestic and export markets was largely responsible for the 18.5% increase in revenue last year to ¥2,196.8b (US$19b) during 2021.

Export sales were driven by the strong demand for tractors and construction machinery in North America, Europe and Australia, while farm equipment sales were strong in India.

While the domestic farm and construction machinery market is expected to remain static during 2022, exports are forecast to increase with continued solid demand in North America and Europe, likely to drive a further increase in consolidated revenue for 2022 to ¥2,450.0b (around US$21b).

In other Kubota news, the manufacturer plans to launch the world’s first hydrogen-powered fuel cell tractor in 2025, initially for the European and American markets. Reports suggest that progress is well advanced in developing tractors ranging from 50 to 100 horsepower, with a prototype ready by 2023. Prices are expected to be around 40% higher than current diesel-powered alternatives.