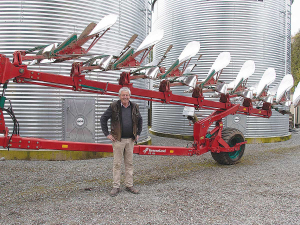 Bill Davey says that despite its size, the plough is very versatile.

Twenty years ago, a land agent told Bill Davey, “you’ll never buy a better bit of land than this!” Back then he suspected land agent spiel, but now Bill admits the agent was right.

Springdale Farm, Somerton, is 487ha of predominantly Barrhill Sandy Silt Loam, which Bill says might need the insurance of irrigation, but “we’ve got good soil that holds the moisture, so we get some excellent crop yields”.

Over the last two decades, Bill and son Nick have diversified and created great synergy between the strands of their business and the dairy industry. Initially an arable operation with lamb finishing, Nick now runs a contracting business, supplying local dairy farms with high-quality forage, a portion of which is grown on Springdale properties.

To add further diversity to their arable operation, Bill and Nick winter graze dairy cows on kale for local dairy farmers, which offer the benefits of increased soil fertility from plant and animal residues.

Previously farming in Lincolnshire, England and used to abrasive soils and heavy wear, Bill bought a Kverneland 7-furrow RG100 reversible that was eventually replaced in 2017 with an 8-furrow, semi-mounted KV PG100 reversible, with break-back legs, from Power Farming, Ashburton.

The break-back system offers protection to the plough when off-farm contracting, with individual furrow legs rising out of the ground, bypassing foreign objects and returning to work.

“Once the plough is set up correctly it is very user friendly,” says Bill.

The ploughman can alter the furrow width hydraulically while on the move, depending on the conditions, headland finishes and crop residue.

Bill says that despite its size, the plough is very versatile, able to plough into tight corners and, with the addition of maize skimmers, can bury crop residues completely, thereby improving the soil’s biodiversity.

Another piece of the armoury in Bill and Nick’s business is the Kverneland Qualidisc cultivator, used to break down the tough residues left by winter-fed brassicas, which clogged conventional tined implements.

Pulling the trailed 6m machine using a 200HP tractor at speeds between 12 to 15km/h, Bill says it “seems to make a better job the faster it’s travelling”.

“Depth control is simple to adjust using the hydraulic ram and nylon shims, with easy adjustment of pressure of the rear packer/roller assembly.”