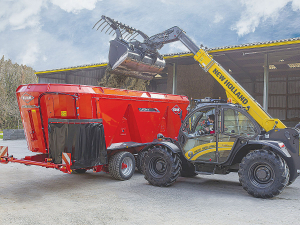 The three vertical augers, along with the polygonal shape of the hopper interior, are specifically designed to achieve rapid break-up of whole bales.

The three vertical augers, along with the polygonal shape of the hopper interior, are specifically designed to achieve rapid break-up of whole bales, while the seven knives with asymmetric teeth are said to deliver a self-cleaning effect. The auger knives work in conjunction with two fixed counter knives for faster chopping and optimum mixing.

All Euromix 3 CL models are fitted with ananti-overflow ring at the top of the hopper, that helps prevent the loss of coarse and fibrous fodder during the chopping phases.

Unloading is via a large discharge hatch to the right or left of the machine onto a broad cross-conveyor with a hydraulic motor at each end. The PVC belt structure of the conveyor ensures a quiet and efficient feed-out and easy maintenance.

Rear discharge is also available as an option, to the right or left side of the machine.

Euromix 3 CL models have a programmable weighing system as standard, allowing pre-set mixing times, storage of ingredients and rations in the system memory, and the accurate control of rationing.

Kuhn’s Intellimix advanced mixer control system, available as an option on all models, works via a continuously variable transmission that is integrated into the tractor controls through the ISOBUS system. This allows a reduction in start-up torque by up to 50%, automatically changing the auger speeds in response to loading, while also optimising the use of power throughout the mixing and feeding process.

With opening and closing of the hopper door automatically triggering the switch between automix and auto-feed modes, and with auger speed able to be pre-set in relation to varying conditions in the hopper, the operation is fully automated and requires no operator intervention.