Time to give back to the industry 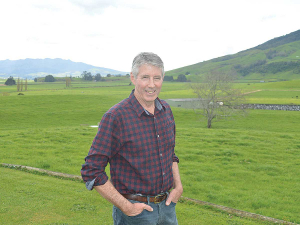 Waikato farmer and Fonterra board aspirant Mike O’Connor says the time is right to give something back to the industry.

The dairy industry has been great to Waikato farmer Mike O’Connor and he thinks the time is right to give something back by standing for Fonterra's board.

O’Connor started in the dairy industry as a farming cadet. After studying agriculture at Massey University, he went sharemilking.

Today he heads the Spectrum Group, a family business with eight dairy farms in Canterbury and Waikato, plus two heifer growing blocks. The business runs 7600 cows and produces over 3 million kgMS.

“We have come from the bottom all the way through,” he told Dairy News.

“I guess through association with other smart people, some luck, some good timing, we came through and managed to grow into a reasonably large business.”

O’Connor never wanted to be anything but a farmer and he’s still actively involved on the family farm at Te Kawa, south of Te Awamutu.

He points out that his family wouldn’t have done well if the industry had not been good to them.

O’Connor now has some very good people working around him and this gives him more time.

“It’s probably now or never…going through the independent assessment confirmed my skills and attributes.”

O’Connor was one of four candidates endorsed by the independent assessment panel as having the right skills to serve on Fonterra’s board.

He says the decision to stand for the Fonterra board was triggered by “suggestions”.

But after going through the assessment process and being endorsed helped him make up his mind.

“That process is quite robust and appropriate…I didn’t expect to get through. Going through the process and getting the panel’s support for my application led me to believe that I have the skills required.”

On Fonterra’s performance, O’Connor makes one thing quite clear – he won’t criticise the co-op.

“I’m not political and have a view that Fonterra has had a very difficult job: to be all things to all people across a whole country.

“It was put together and supported by all shareholders of those original dairy companies…no easy task.

“I I think you have to talk about the long game, therefore it’s very easy to be critical, but I am not.”

O’Connor says he has learnt how difficult it is to restructure companies.

His company Spectrum was formed 25 years ago by three shareholders. Following the global financial crisis its assets were restructured.

“I have learnt how difficult it is. Restructuring Spectrum was a very difficult task and it is minute to what forming Fonterra would have been.”

O’Connor believes all Fonterra leaders, past and present, have done their best make the co-op an entity that shareholders would be proud of.

“There are many things that it does very well. It’s a very large and complex and dynamic business.

“Perhaps they can’t do everything well all the time and it ends up getting some criticism.”

Mike O’Connor says he has noticed a positive change in Fonterra after two years of financial losses.

He says many other businesses would have reacted in the same way after two years of losses shocked its shareholder base.

“When businesses have lack of capital or financial woes with the bank, instead of growing the business they think about making the best of what we’ve got. Fonterra is doing exactly the same.”

O’Connor says he understands the co-op’s strategy over the last 12-18 months.

“I feel that the business is less broken that it was 18 months ago.”

“I can understand the current strategy…you can only languish in losses for so long.

“Any business has to turn a profit otherwise it will continue to lose shareholders.”

“We need the nation to be proud of us and of what we do.”

He noted that the recent final accounts meetings with shareholders were very positive.

“We need to keep that momentum so the shareholders feel privileged to be part of the co-op. We can’t have an All Blacks team if some players are not interested.”