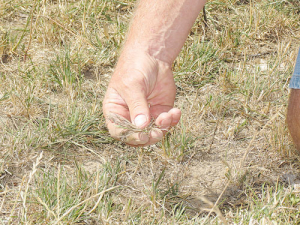 Southland farmers working through drought are facing a dwindling supply of supplementary feed.

A dwindling supply of supplementary feed is one problem facing Southland farmers working through drought.

Federated Farmers Southland president Allan Baird, a dairy farmer near Dipton, says the market for palm kernel (PKE) has tightened because a lot of PKE was fed out in November, December and January.

“A lot of the suppliers’ stocks have been consumed and now they are restricting [what they have] to farmers with contracts; that’s taken away some of the short-term supply. You’re never quite sure how much to contract so you contract 30-40% of what you need and hope to pick up the slack if it’s required.

“Every summer is  different in Southland,” Baird says. “Some years you may get away without needing PKE at all whereas this summer is a 15-20-year dry period and it’s really been in demand.”

Reasonable rain fell a couple of weeks ago, with coastal areas getting 50mm and inland 100mm, he says. In Dipton they got about 60mm.

Some parts of the province are worse hit by the drought than others: there are pockets where it is bad and others where it is not as bad. Traditionally there are places where in summer it is relatively easy for dairy farmers -- from the coast up towards Dipton where Baird farms.

“The southwest rains traditionally come in and  keep those areas in good shape. But this season the rains have come more from the northwest and so properties in Mossburn through to where I farm here in Dipton have received still below-average rain; but we have had some rain so it’s not as dire as other parts of the province.”

Farmers in Southland have seen their options narrowed. They rely on summer crops such as turnips and grass silage.

Irrigated farms have found themselves in trouble with low river flows causing some irrigation schemes to be shut down; not enough rain has fallen to recharge rivers and groundwater.