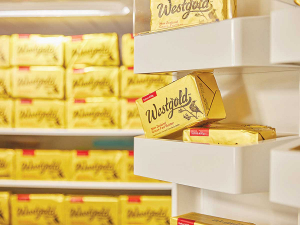 Westland is doubling the capacity of its butter operation from 20,000 tonnes to 40,000 tonnes.

Westland Milk Products is about to start a pretty special gold rush aimed at increasing the Chinese-owned dairy company's profitability.

Chief executive Richard Wyeth says 'Project Gold Rush' is all about upgrading and doubling the capacity of its butter operation from 20,000 tonnes to 40,000 tonnes.

He says a major benefit of having Yili as the parent company of Westland is that they are prepared to invest capital in the company - in this case $40 million.

"It's a very exciting project not only for the company but the whole of the West Coast.

"There are obviously a lot of contractors going into Hokitika... putting money into the economy, which is fantastic. We have sold the old butter churn and installed two new churns. We are looking forward to having these commissioned in late August and being in commercial production early September," he told Dairy News.

Wyeth says they won't immediately be running the butter plant to full capacity and says he expects it will take about two years for sales to build up. Its Westgold brand is sold in more than 20 countries around the world, including the US, Japan and China.

The company has focused on telling consumers about the unique environment of the West Coast with its grass fed farming systems and the farming families which have operated in the area over many generations. Westland has also won awards for its butter, including its Westgold salted butter taking out the title for champion overall butter at the prestigious New Zealand Champions of Cheese awards in 2019.

According to Richard Wyeth, this latest move by Westland will have a significant impact on the economy of the region.

"Dairy has a bigger impact on the coast than it does in any other region in NZ simply because of the amount of money that comes into the area relative to any other industry," he says.

Wyeth says last season's payout was good and prospects for this season are also positive. But he warns that the projected $8/kgMS payout may fall given the trend of recent GDT auctions.

He says his number one goal as CEO is to make sure that Westland performs well financially. In a recent roadshow he made this clear to the company's 400 suppliers.

"I told them my role is to get the business performing where it needs to be and they were receptive of that message. They are pretty resilient and are looking forward to seeing the company perform well," he says.

Wyeth says the first milk collections have now begun and, despite some challenges with the weather leading up to calving, he is hopeful of a good season.

Omicron is going to be challenging for the Hokitika-based Westland Milk Products (WMP), according to chief executive Richard Wyeth.

The Hokitika based dairy company, Westland Milk Products has put in place its flood response plan ahead of a predicted Red storm alert for the West Coast of the South Island.