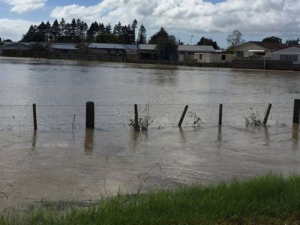 Primary Industries Minister Nathan Guy says dealing with silt on dairy farms around Edgecumbe is going to be a big problem.

Guy visited the region recently and flew over some of the worst hit areas.

He says while pastures near Edgecumbe itself appeared to be under water, further out at places such as Taneatua silting is a problem.

“We need to get some experts into the region who have been through floods before and know how to handle re-grassing on silt because there are all sorts of different theories out there as to what is the best way to deal with this. These include ploughing it back in, waiting for it to dry, direct drilling, and roller drilling -- putting on fertiliser with grass seed. All need to be considered.”

The Government classified the flooding from ex-Cyclone Debbie as a medium-scale adverse event. This declaration provides for extra recovery assistance including recovery coordination, increased support through Enhanced Task Force Green teams and the Bay of Plenty Rural Support Trust, and tax flexibility

Guy says he’s impressed with how farmers and rural organisations have worked together to deal with the problems of the flooding.