Recovery on the West Coast 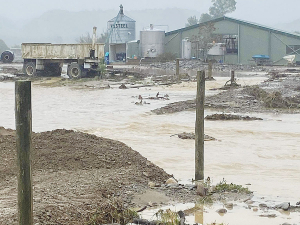 Dairy farmers in the Buller region of the South Island are at last making progress getting their properties up and running following the devastating floods that hit them in February.

The president of West Coast Federated Farmers, Bede O'Connor, whose farm was among the worst hit, says things are now starting to look positive with grass growing and a spell of good weather.

He told Dairy News that farmers have been able to repair some of the damage and get new grass seed in.

But he says some other jobs such as repairing damage around creeks will take longer.

"In my own case we are back up and grazing about 70% of the farm that got flooded in the first week of February and the last 30% of that land should come in before the end of May.

"We are down on cow numbers and we have milked once a day all year," he says.

O'Connor says a mini drought in March pushed a few farms a bit in terms of feed but he says since then there has been some rain.

O'Connor says as long as they don't get a wet autumn, things will be okay.

He adds that some farmers won't have normal amounts of baleage going into winter because they simply haven't been able to make this due to the various adverse weather events.

"Some feed will likely be brought in from Canterbury, but this is something that happens from time to time and is seen as an option for West Coast farmers.

"You must remember we had a very wet spring so a lot of people haven't made the amount of baleage that they would normally make, but hopefully they have been able to make some later in the season," he says.

O'Connor says there is no sign yet that farmers are drying off their cows. He says the farmgate milk price is good, there is more feed around and he notes that farmers will hold off making any decision on drying off until the middle of May. "I haven't heard of anyone drying of yet," he says.

Getting cull cows into the works this year is a bigger challenge than normal, according to O'Connor. He says with the way the delays are going, it's possible that some culls will be held on farm until possibly the end of June. He says the effect of this is to create a hole in the feed budget.

"I have talked to a couple of stock agents who are working to see how they can help where people are really in trouble, but they can only do so much with limited killing capacity," he says.

O'Connor says Covid has been on the West Coast for at least a month and he says this is having an impact.

He says it's a matter of waiting and seeing what might happen. He says a lot of farmers are staying on farm and being very careful about how they go about their business.

West Coast farmers are racing against time to repair pastures damaged by the recent floods.

The Government has activated Enhanced Taskforce Green (ETFG) in response to flooding in the Buller and southern Tasman districts.

Buller dairy farmers hit by the recent floods are facing a critical situation as they try to get their damaged farms ready to cope with calving which starts in a couple of weeks.

FOUR OUT of five of the latest Nuffield Scholarship winners are from the dairy industry.

Drought has been officially declared in the Buller and Grey Districts by Primary Industries Minister Nathan Guy.