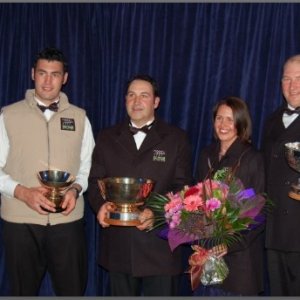 The 2012 New Zealand Dairy Industry Awards have received a record number of entries.

Across the three categories; sharemilker/equity farmer, farm manager, and trainee; 525 entries were received by the December 20 deadline, say organisers.

“It’s a great result to ponder over the Christmas and New Year break and will deliver the strongest ever competition,” says national convenor, Chris Keeping.

Waikato has most entrants overall at 73 across the three contests, with Canterbury/North Otago second on 65.

“What is also really pleasing is the number of first time entrants in the awards, with 384 people entering for the first time this year,” says Keeping.

“Some of our finalists and winners last year had entered the awards three, four and even five times. Each time they gain from the experience and strive to do better for them personally and their business. So the large number of first time entrants bodes well for the awards’ future,” she adds.

Entrants will be invited to attend information evenings in January to help prepare for judging, which begins in late January. The first of the regional awards dinners and winners will be announced in late February.

All regional winners will progress to the national finals in Auckland on May 12, 2012. Further information on the awards can be found at www.dairyindustryawards.co.nz.

Runners-up for the Canterbury/North Otago Sharemilker of the Year title are Shaun and Andrea Wise, who contract milk 590 cows for Dairy Holdings on a 134ha Rangitata Island property.

Despite the low milk price there was a positive vibe among the 33 finalists competing for the NZ Dairy Awards this year.

Pay cut worth every cent

DANNEVIRKE SHAREMILKERS Mark and Jaime Arnold were named the 2016 New Zealand Share Farmers of the Year. They took home $52,000 in cash and prizes at last night's national awards in Wellington.

Build up to dairy awards

Thirty three of the nation's top dairy farmers will be heading to Wellington to vie for the three top titles.