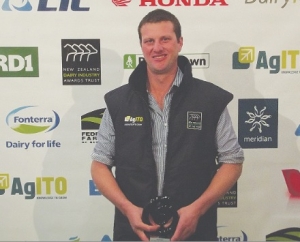 RECORD ENTRIES in this year’s Dairy Industry Awards, which wrapped up late last week with the West Coast/Top of the South region, were achieved despite a record low in Otago.

Organisers are at a loss to know why the farm manager, and in particular sharemilker/equity farmer (SEFOTY) categories failed to attract sufficient entries to hold a credible competition in the region.

“If we knew the reason, we’d have fixed it,” national convenor Chris Keeping told Dairy News. “We know the number of 50/50 sharemilking positions in the region is declining and we often struggle for entries in the region.”

This year SEFOTY entries bombed to just two, and FMOTY entries only marginally better at four. With such low entries organisers didn’t consider the awards would be a worthwhile competition but rather than pull the pin completely, entrants were given the chance to go through the judging process and the feedback from that. Similarly, sponsors were given the option of presenting their merit awards, or not.

No outright SEFOTY or FMOTY winners were announced, so neither will progress to the national awards in Wellington in May.  “To run a credible competition you must have at least seven entries, we believe,” says Keeping.

A highly commended award was made in the SEFOTY category, going to Shaun Thomas, a 50/50 sharemilker with 470 cows on David and Christine Benny’s farm, Balclutha.

In the FMOTY competition Neil Molina, who manages a 2300-cow farm for Greg and Kelly Kirkwood’s Concept Holdings at Ranfurly, was named Best Otago Farm Manager of the Year.

Local convenor Lorraine Johnson says while it is unfortunate for Thomas and Molina that the entry level wasn’t sufficient for them to progress to the national level, they are eligible to enter the awards again next year, which isn’t normally the case for regional winners.

“We felt really bad for the group that did enter,” she told Dairy News. “They’re very motivated, capable young people.”

SEFOTY and FMOTY entrants in the region were told there would be no progression to the national level for the region’s winners before judging commenced, and given the option to withdraw, she adds. “They all decided to carry on which was great.”

Johnson and husband Tim, who won the region’s SEFOTY title in 2011, pulled out all the stops to encourage entries, even cold calling on farms to see if a manager or sharemilker was part of the set-up, but to no avail.

Part of the reason for lower entry levels than elsewhere is simply a numbers issue, she suggests.

“There are only about 400 dairy farms in Otago whereas there are 1600 in Southland, so pro rata we probably didn’t do so badly.”