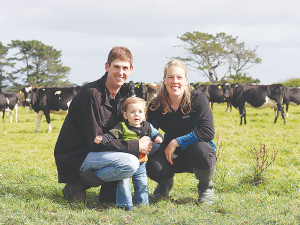 John Wyatt, wife Kristina and son Caleb on their farm.

In March, Wyatt was named the 2021 Taranaki Share Farmer of the Year, the latest step in his progression through the ranks of the dairy industry and a history making moment.

It's historic because claiming the title meant that Wyatt became the first person to win all three NZDIA categories - he was the 2009 Hawke's Bay/Wairarapa Dairy Trainee of the Year and the 2015 Manawatū Farm Manager of the Year.

"It was at the back of my mind when I entered," says Wyatt. "But I had no idea that no one had ever done it before, so it's pretty cool."

John grew up on a sheep and beef farm near Dannevirke and was often helping the neighbours with shearing and docking.

"I have always been keen on farming, I enjoy being outside and working with animals, so I knew that was where my future lay."

But in 2007, he left home and gave up sheep and beef in favour of dairying.

"I realised that dairy farming offered a better progression path to farm ownership and more opportunities than sheep and beef, so I gave it a go, I enjoyed it so I have just kept doing it."

His first job was as a farm assistant on a 440-cow farm near Dannevirke.

I have always been keen on farming. I enjoy being outside and working with animals, so I knew that was where my future lay.

"It was a bit of a learning curve milking those first cows but I got the hang of it pretty quickly and there was always something different to do each day."

By 2010, he had learnt enough to take on a manager's role at a 300-cow farm at Pahiatua, while for the last four years John and his wife Kristina have been contract milking for Mike Hammond on his 106ha, 315-cow Auroa property.

Wyatt reckons one of the keys to his success is that he's always keen to learn.

"I want to know as much as I can about what I'm doing so having that knowledge is important. That's why I did a diploma through Primary ITO and I think that has really helped my career."

Away from the farm Wyatt and Kristina enjoy staying active, but with one-and-a-half-year-old son Calbe to also care for, finding time can be tricky.

"I play squash and Kristina plays hockey. We both enjoy mountain biking together as well, although it's a bit more difficult now that we have a family. We're not far from the beach at Opunake and there are some great walking trails on the mountain which is less than 30 minutes away. There's lots of outdoors stuff close to us so we try to get out when we can."

They are now in the process of buying the herd they currently contract milk to start a 50:50 sharemilking partnership.

"We're really excited about that. It's great to be staying on the farm. The plan for the next few years is to pay off some debt and then hopefully be in a position to buy a farm of our own.

"Kristina and I work really well as a team. I enjoy the satisfaction of a job well-done and want to set a good example and create a future for my family."

The regional winners now progress to another round of judging round with the overall New Zealand winners announced at the National Awards Dinner on Saturday in Hamilton.

The New Zealand Dairy Industry Awards has received 366 entries for its 2021 competition.