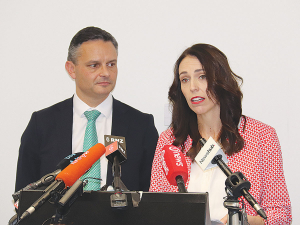 While most go along with the principle of reducing greenhouses gases, there is some angst about the targets set by the Government in the Bill.

The Bill sets a target of reducing all greenhouse gases, except biogenic methane, to net zero by 2050.

Also, the Government plans to set up an independent Climate Change Commission which will advise, monitor and review the targets on an ongoing basis.

Prime Minister Jacinda Ardern says climate change is now front and centre of awareness in New Zealand -- the biggest challenge facing NZ. She says NZer’s have demanded action and the Bill is actioning that call.

“This legislation makes a start on tackling climate change because the alternative is the catastrophic cost of doing nothing. Agriculture is of course incredibly important to NZ  but it also needs to be a part of the solution,” she says.

Ardern says in developing the legislation they have listened to the science and the industry and the result is a commitment to reduce greenhouse gas emissions in line with the need to limit global warming to no more than 1.5 degrees Celsius to avoid the worst impact of climate change.

Climate Change Minister James Shaw says the Bill makes this target legally binding and says NZ is one of the few countries in the world to do this.

At the news conference at Parliament, James Shaw praised opposition leader Simon Bridges and Todd Muller, National’s spokesman on climate change for their support in developing the Bill.

He says this means there is an enduring commitment to dealing with climate change.