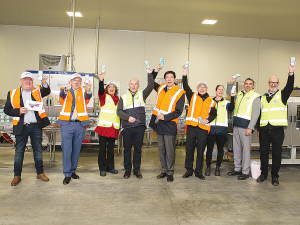 The so-called UHT bricks are in fact 250ml Tetra Packs, which Miraka produces exclusively for the Chinese market.

Chief executive Richard Wyeth says UHT production for China began on August 20, 2014 and it has taken just under six years to produce the billionth pack.

“We had a fantastic celebration to mark the occasion with special guests including the Mayor of Taupo, a representative of Terry Lee, and the Chinese Consul from Auckland coming along for the occasion,” he says.

Wyeth says this is an outstanding result for the production team at Miraka. He says, according to Tetra Pack, the Miraka production line is the top performer in Australasia. UHT is an important product for Miraka accounting for 20% of their total milk supply.

Miraka has two production lines producing UHT milk and Wyeth says they plan to put in a third line to produce concentrated milk.