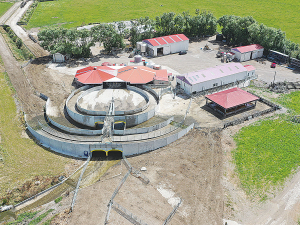 After leaving Parliament he went back to his dairy farming operation in Taranaki and this year built what is said to be the fastest dairy shed in New Zealand.

Faced with having to replace his aging shed he travelled the world to find the answer and he found it in the US – a twin rotary shed.

Shane Ardern says the problem with most of new dairy sheds is that while they are highly spec’d, they are slow.

The twin rotary he’s had built consists of two 40 bail rotary platforms which enables him to milk his 600 cows in just one hour. “Most of the modern sheds milk about 400 cows an hour and cost about half a million dollars more than mine. Most of the sheds suit the builders, the milking machine fitters and engineers, but don’t suit the cows and the management of stock flow,” he says.

Ardern says for many staff spending long hours in the milking shed is not something they like and is inefficient use of labour.

Milking cows faster he says is a win-win for farmer and staff alike. He says DairyNZ should start taking a closer interest in milking shed design.

Arden’s unique model has been picked up and copied by Nathan Guy and is one that is likely to be copied by others, and could revolutionise the dairy industry in NZ.

The first 84-bail composite Waikato Milking Systems rotary platform built in the US has won an energy efficiency award.