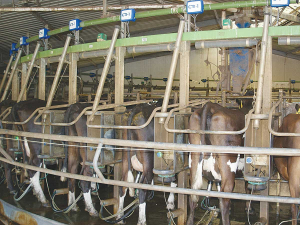 Milking 520 cows in a 50-unit rotary system, built in 2005, the Shewans found the existing cup removers a burden.

“It was frustrating milking cows every day without knowing what was going to fail next,” says John.

He says they faced the same issues daily: going from one end of the rotary to the other just to ensure that the cups were coming off at the correct time.

They were forced to take on a second person for milking, when the system only needs one milker.

John says tired and frustrated with these reoccurring issues they decided to upgrade the existing cup removers to MilkTechNZ’s CR-1 cup removers.

“The installation process was completed within a few days and without any interruption to the milking.

“The rotary is now a one-man system again and the cows are milking out cleanly,” he says.

The Shewans say they are now working in a worry-free environment once again and can continue with business as usual. “It is a pleasure to milk cows again,” says John.

They are designed and manufactured in NZ: featuring a durable three-inch stainless steel ram, an illuminated switch and a free-flow sensor. The CR-1 also uses electronic componentry that is mounted high and safe in the milking plant, thereby substantially reducing the exposure to moisture and muck.

Integral technology sees a range of customisable parameters controlled by the latest software and programming of milking parameters using Wi-Fi connectivity to an enabled device, with the added benefit of software upgrades in ‘Real Time.”

MilkTechNZ says this feature allows mass adjustment of the units, rather than the more typical method of using control screens for individual units.

Additionally, in-built diagnostics can alert operators to any issues that may occur during the milking cycle.

While removing teat cups at the end of cycle, the CR-1 can also support in-bail teat spraying and bail-gate control in rotary sheds alongside automated milk-sweep functions to clear lines and cluster drop functionality.

“Our CR-1 cup removers offer a host of features to make life in the milking shed so much easier and can also be retro-fitted to existing systems as plant fails, usually at much lower cost.”

Garza says the units are available throughout the country through an approved dealer network. On the export front, CR-1 cup removers are already making inroads into countries such as Australia, Brazil, Argentina and Chile.

The first 84-bail composite Waikato Milking Systems rotary platform built in the US has won an energy efficiency award.