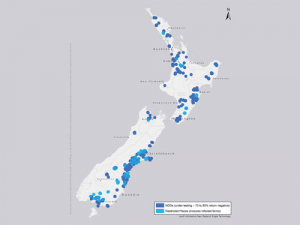 A map of the Mycoplasma bovis spread indicates that only the Bay of Plenty and Marlborough remain free of the disease.

Thirty-seven farms were known at the end of August to be infected with Mycoplasma bovis, says the Ministry of Primary Industries.

Including those infected farms, 58 farms are now listed as restricted places (RP).

Notices of direction (NODs), which restrict some movement of stock from farms and are usually applied to farms where test results are pending, are in place on 190 properties.

A Biosecurity NZ map of the M. bovis spread indicates that only the Bay of Plenty and Marlborough remain free of the disease, with neither RP notices nor NODs in force.

Taranaki and the South Island’s West Coast have farms under NODs but as yet no confirmed infection. MPI says 70 - 80% of NOD farms do not go on to prove infected.

MPI is telling farmers to check that they have robust biosecurity practices. Simple steps farmers can take include:

• ensure visitors clean and disinfect their equipment, clothing and footwear upon arrival at your farm

Biosecurity NZ has confirmed a property in Northland has tested positive for M. bovis.

Although several farms in the region are under a notice of direction (NOD) – usually applied to farms where test results are pending -- it’s the first time the disease has been confirmed in Northland.

Two weeks ago the Tasman district was found to have an infected farm -- the region’s first.

Northland’s infected property is a drystock beef farm. It was identified by tracing animal movements from known infected farms. It is now under a ‘restricted place’ notice under the Biosecurity Act 1993 -- in quarantine lockdown which restricts the movement of animals and other risk goods on and off the farm.

Biosecurity NZ is not publicly naming the farm but neighbours who share a boundary with it have been notified. It says the risk to neighbouring farms is very low.

All infected groups of cattle on the farm will ultimately be culled.