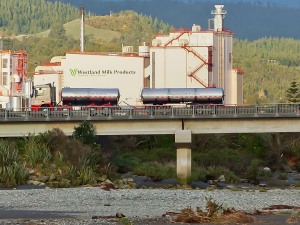 Westland Milk Products’ sale to Chinese interests is an ironic end to the co-op, which last August was named New Zealand’s 2018 Cooperative Business of the Year.

The award is made to a member organisation “that has made a significant and positive impact within the cooperative community during the 2017-18 year.”

At the time, the judges called it a recognition of Westland “successfully re-inventing itself using the enduring cooperative model as a strength, while promoting to its customers the productive relationship it has with its 350 shareholding farmers”.

Craig Presland, chief executive of Cooperative Business NZ, had no regrets about the award, decided by experienced judges and based on Westland’s 2017-18 performance, a turnaround from previous years.

“Twelve months later... these things are always easier in hindsight, aren’t they, looking back.”

Presland said Westland’s woes go way back, such as decisions on A2 milk, the value of their share price for additional milk being too low, and their move into Canterbury.

But Westland’s failure was “not at all” a problem in the cooperative model, which Presland said was “all about endurance and sustainability”.

Of Cooperative Business NZ members, which include Fonterra, Tatua, LIC, FMG and SBS Bank, two-thirds are over 20 years old and five are over 100 years old.

“For Westland I think the disappointment was they couldn’t come to an agreement with Fonterra about ownership and remaining a cooperative wholly owned in NZ with profits retained locally.”

He questioned why they hadn’t acted the way Silver Fern Farms did two or three years ago, setting up two entities, one 100% NZ-owned.

Presland said Westland profits in the end would go overseas.

“Sure there’s talk of matching Fonterra’s price for the next 10 years but what about beyond that? Where’s the long-term thinking for future generations?

“I don’t want to comment too much about their performance but it’s certainly not about the co-operative model. It’s a fine balance between putting money into payouts versus holding it back for capital projects for investment. Maybe that’s partly where Westland went wrong.”

Wyeth ready for the 'Coast'

The chief executive-elect of Yili-owned Westland Milk Products Richard Wyeth is looking forward to the challenge of running the company.