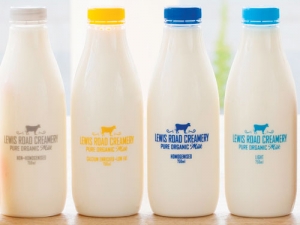 Organic Dairy Hub’s milk has ended up in the domestic liquid market.

And Bill Quinn, Organic Dairy Hub, says its presence in the sector is raising awareness and the validity of organic milk.

He points out that in March last year, Fonterra's organic milk suppliers were paid the farmgate milk price plus $1.05 premium for every kgMS; the premium was later raised to $1.50, then $1.75.

In February this year, Fonterra announced it was going to a market-based payout.

"The question is, would that have happened if the hub was not there. I put it down to competition; it is healthy for the industry."

Quinn says Fonterra is playing catch-up to the Hub.

ODH pays its suppliers 90% of the milk price within one month and the remaining 10% within three months; all payments are finalised by June 20 of each year. All its trade is done in New Zealand and in NZ dollars.

He says the Hub is getting enquiries from Fonterra organic suppliers and other farmers.

"We are inundated with farmers willing to supply, from North Island and South Island. As a serious option corporate farms and iwi group farms are now looking at it, so we are talking big farms."

Organic farm numbers have declined from 127 five years ago to 70. However, for the first time in five years, applications for organic certification have grown.

Quinn says says he expects to see 100% growth in farms under organic certification in the next 12 months.

A small group of North Island organic farmers has launched a new dairy brand, hopeful that one day it will become a household name.