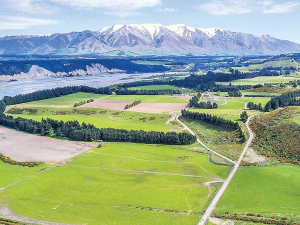 There was no shortage of dairy farms listed for sale.

The report author, Collier International director of rural valuation Greg Petersen, said while it was now late in the season, he was aware of other “conversations” going on between would-be buyers and sellers and the year could end up with eight or nine sales: compared with 14 last year and a usual tally of 30-35 a year.

“Despite a relatively strong milksolid payout and favourable spring and summer conditions to date, Canterbury dairy market sentiment is currently at a low ebb. There is an overall theme of uncertainty within the current market which has resulted in a dearth of sales,” said the report.

There was no shortage of dairy farms listed for sale.

The generally glum report noted that liquidity in the market had appeared to dry up, and the number of vendors wishing to sell for genuine reasons, such as life events including retirement, is heavily outweighed by those who are being “encouraged” to sell.

“As the complexity of dairy farming is increasing every year under the weight of increased external compliance, farmers are spending more time in the office and less time on the land, we are aware of a group of vendors who are genuinely looking to exit the industry because the enjoyment is no longer there. This is further compounded by the negative perception of the dairy industry in some sectors of the wider public.”

The report noted three distressed sales of dairy farms in the region in the past 12 months (including some of the previous season). Many dairy farmers had seen their equity reduce, and banking conditions had changed, with most banks now requiring both principal and interest payments.

“Hard conversations are currently being held between bankers and farmers about their equity position, with some farmers actively encouraged to bring their properties to the market, if a clear plan forward cannot be found.

“In the case of the distressed sales, the eventual sale price of all three properties appeared to be based upon the next best alternative land use, rather than their continued use for dairying.”

The report said buyers were scarce. When international purchasers were active in the market, it gave others confidence and also provided a trickle-down effect of outside money instead of debt.

“With confidence low throughout the industry, we are not currently seeing any demand from farmers wishing to move into Canterbury.”

Nutrient reductions under the Canterbury Land and Water Regional Plan were now being felt, in the form of uncertainty around future milksolid production, and there were no longer purchasers looking to dairy conversions.

Much of the growth in Canterbury dairy land values over the past two decades had come through a ready availability of capital, but banks, under pressure from the Reserve Bank, are now requiring the repayment of the additional debt accumulated during the low-payout years between 2014 and 2016. As loans have come up for review, banking covenants have been introduced to provide for the amortization of debt over a period of 20 years, with both interest and principal now payable.

“We are aware that some banks are actively trying to rebalance their lending book away from higher risk dairy debt.

“This has led to a liquidity constraint within the Canterbury dairy market, restricting the ability of buyers to access debt funding to enable the purchase of properties.”

However, Petersen told Dairy News that it was a dynamic market with a lot of forces at play.

“There are actually a number of reasons why you would be positive. The milk price is positive and all expectations are that it should remain so. And interest rates are currently low.

“Although there are potential clouds on the horizon, there is always that uncertainty.”