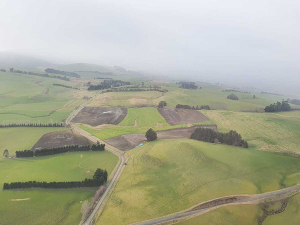 Feds Southland dairy chair Hadleigh Germann told Dairy News that there were “one or two bad apples” and these farmers were followed up by the Southland Regional Council.

“On the whole, farmers have done very well to improve winter grazing practices compared to other years,” he says.

He was commenting on a council statement praising farmers for their efforts this winter after an aerial surveillance operation.

“I’m impressed that farmers have taken up the advice given to mitigate the effects of winter grazing on the environment, despite the many challenges this year has presented.

“We know implementing good management practices, such as back fencing, buffer zones and being mindful of critical source areas, can make a big difference and we are seeing the results of that this year.”

Federated Farmers worked with the council, DairyNZ and other stakeholders to raise awareness of moving away from grazing cows in knee-deep mud especially during extreme wet periods in winter. This followed a public campaign which included photographs and videos of cows standing and lying in deep mud.

“No one wants to be on the front page for the wrong reasons,” he says.

With winter almost over, Germann advises farmers to start planning their crop requirements going forward and “start thinking about what to do and how to do it.”

The council is also warning farmers not to become complacent as although this winter has been relatively mild.

“There’s still some time to go and we can’t predict what next year will bring. Farmers should now turn their focus to preparing for the next season and continue to build on the good work they have done,” says Phillips.

“Intensive winter grazing continues to be under the spotlight, it’s a high risk activity in relation to water quality and needs to be managed very carefully.”

The council undertook three compliance aerial inspection flights this year and “only a small number” of properties have required follow-up, mostly relating to education around critical source areas and back fencing.

The council also noted that there was significantly reduced winter crop grazing being undertaken, with a number of alternative options being used, such as wintering barns.

Farmers are now being encouraged to ensure good planning for their winter grazing for next year.

“Planning now is the key to next year’s success. Choosing the right paddocks and taking into account things like critical source areas will set farmers up for a good year,” says Phillips.