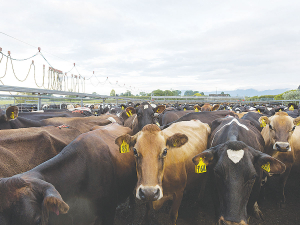 Agribusiness leaders are facing fatigue and vulnerability and it’s not only from Covid-19, according to the KPMG Agribusiness Agenda.

The report, released last week at the National Fieldays, says there is a fundamental pressure on leaders, and it was clear from conversations that industry morale has fallen significantly over the last year.

KPMG global head of agribusiness Ian Proudfoot told Dairy News that leaders are facing fatigue and vulnerability and it's not only from Covid-19.

He says local issues are also causing angst for leaders interviewed for the report. The pace of regulatory change, especially since Labour's landslide election victory, is worrying.

Proudfoot says it's clear that issues like water, decarbonisation, and immigration policies are causing fatigue. Even labour-friendly policies like creating extra public holidays aren't going down well with the sector leaders.

Proudfoot says the report has been the "hardest one" KPMG has written in the past 12 years.

"We could sense anger during our conversations, particularly in relation to the labour shortages the sector faces.

"At times it felt as though we were talking to leaders who were primarily focused on finding the strength to fight another day rather than the energised leaders of previous years."

The report states that practical labour and shipping challenges that Covid-19 has created are consuming most executive time and effort. The speed at which things are changing is unprecedented and very often means that the appropriate decision in the morning needs to be revised in the afternoon.

"Change is good for our country; however, the point was made that it is the breadth of change that is stretchinf many organisations," says Proudfoot.

"In addition to this, the Climate Change Commission's final advice on farming has also presented pressure for the sector to do its part, or even to do the heavy lifting for New Zealand."

For these reasons, it is the first time in writing the Agenda that there are tangible concerns over the ability of New Zealand organisations to engage in the great big, beautiful tomorrow that is emerging rapidly across the global agri-food sector, he adds.

"Can we connect to a world of opportunity? There is a global food renaissance happening right now and we strongly believe that the ability to connect and participate in the future of food at scale, remains available to New Zealand organisations.

"However, the people that can make this happen, executive teams across the industry, are the same group of people that are currently under significant pressure dealing with the day to day challenges of their businesses."

Proudfoot says that while the report recognises that the industry is currently operating under extreme pressure, it also illustrates that there remains great potential to become highly involved in shaping the global food renaissance in many ways.

"New Zealand is in a good position but it's not going to be good forever. Our organisations need to act now and leverage our current reputation to secure a place at the table before our invitation to join the global food renaissance expires," he says.

Farming sector morale on the wane

More evidence - if it was needed - that farming sector confidence is on the wane, burdened down by increasing red tape and workforce shortages.