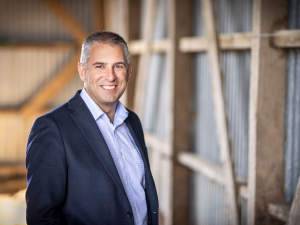 The co-operative is remaining modest despite paying $1.50/kgMS more to its farmer shareholders than Fonterra.

"We are pleased with the result as being reflective of a well-rounded performance in another challenging year," he says.

"We are reluctant to compare our payout with others given there is such a range of business models, ownership structures and supplier entry costs - but nevertheless, we know we have achieved a good result for our shareholders."

Tatua's 106 shareholder-owned farms had their second highest milk production season on record, supplying 15.65 million kgMS, 3.3% ahead of the previous year.

Greaney says the payout has been well received by farmer shareholders.

"We've had some very positive feedback - including broad support for retaining some earnings for reinvestment and maintaining a strong balance sheet."

The co-op has retained $18m for reinvestment to improve production capability and sustainability-related projects.

"We do have a reasonably weighty capital program planned for the year, including projects with a sustainability focus, as well as others to increase our capacity and capability in the manufacture of our specialist or value-add products," says Greaney.

In deciding the final payout, Greaney says Tatua sought to balance the needs of shareholder's farming businesses with the requirement for continued investment in the business to support longer-term sustainability, and "a sensible level" level of debt.

The co-op's gearing (debt divided by debt plus equity) averaged 20.5% last year, which was lower than the previous year average.

"We have deliberately reduced our debt levels over the last few years to be in apposition that we now think is about right for the environment we are in," adds Greaney.

He paid tribute to the co-op's workforce, both here and overseas.

"Our people have once again shown real dedication and commitment toward the business through another challenging year. Our financial performance and everything that has been achieved is the reflection of the collaboration and collective efforts of everyone."