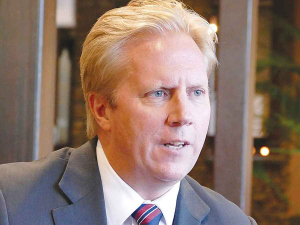 McClay told Dairy News that no one should be surprised at what has been called a terrible, embarrassing and unacceptable offer.

He says the EU is like this and says if the NZ ag sector is unhappy with the offer they should be directing their criticism at the Labour Trade Minister, David Parker, who is responsible for the negotiations.

About a fortnight ago a document setting out an offer to NZ as part of the FTA negotiations with the EU was leaked and it brought howls of protest from the NZ ag sector and from Parker himself. The deal was said to be worse that the current trade arrangements with the EU prompting Parker to pick up the phone and make a call to the EU Trade Commissioner Phil Hogan to protest at what has been called a shoddy offer.

McClay questioned whether Parker has been taking the negotiations with the EU seriously enough over the past three years.

“I hope that the Government hasn’t given away some of the things that the EU wants, for instance, around geographical indicators. I have heard they have moved a long way towards the EU position on that. The thing about trade negotiation is that it’s about both sides wanting something and having to give some things up, and there was a list of things the EU wanted from NZ. I am really concerned now that David Parker and the negotiators have given too much to the EU, too early,” he says.

According to McClay, the FTA was always was going to come down to agricultural access and he says the EU will play hardball when it comes to negotiations.

The nature of the leaked deal indicates that the EU is adopting a very strong protectionist philosophy which McClay says is at the core of its agricultural policy, despite denials to the contrary.

“I am surprised that David Parker hasn’t been demanding every single day, since he became trade minister, the same treatment the EU gave Canada in their FTA. The Canada deal was a very good deal for Canada and their agriculture.

David Parker says he was surprised and angered by this offer to NZ which suggests to me that somebody hadn’t been paying enough attention, because the agricultural community of NZ is not surprised.

They have been telling the minister for a long time that things have not been going right with the EU negotiations,” he says.

'Get on the phone'

McClay says it’s up to Trade Minister David Parker to salvage the deal and get on the phone and start talking to representatives of all the countries and other appropriate people in the EU. He says the deal is salvageable but that it’s Parkers job to sort it out.

McClay says he’s surprised that Minister Parker hasn’t been to Europe every single month he’s been in office, persuading politicians and officials there that they must deliver what they promised – a comprehensive, high quality FTA.

“You’ve have got to be shooting for the stars and accept nothing less than what is good for NZ exporters. We should not walk away if the deal is not good enough, rather we should continue negotiating and not accept something that is not in NZ’s interests,” he says.

McClay says in the past NZ has negotiated some excellent deals such as the FTA with China, although he says the so-called upgrade of this is “disappointing”. He says if NZ accepts a poor deal with the EU, it will become the benchmark that other countries will use when negotiating FTA’s with us. He points out that negotiations with the USA, South America and India are on the cards at some stage.

He also notes that at some stage NZ has to negotiate an FTA with Britain. He says there is a risk that if NZ accepts a low offer from the EU, Britain in turn may offer NZ less than they originally planned.