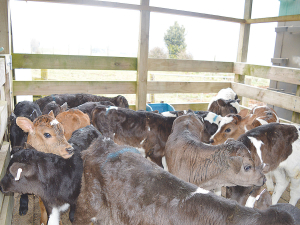 Bobby calves are showing up at processors in much better condition than before 2016 when the new handling rules took effect.

He says farmers have told him they are positive about the new regulations and the clarity these give on animal handling.

With the calving season now starting, Rodwell says farmers should ensure their facilities for handling bobby calves are in order.

“Check loading ramps and make sure they are compliant and undamaged and don’t have loose nails.

“MPI will have veterinarians at processing plants looking at the state of bobby calves coming through. If we detect calves that are unacceptable this triggers a process to issue an infringement notice. Last year we issued 148 notices -- not huge.”

Rodwell says MPI will also spot check loading ramps then “follow the tracks”. An MPI staffer will go with a trucker checking facilities on farm and spreading the message about compliance.

“We stress the main thing: calves must be kept warm and dry until aged four days. They need good timely feeding including colostrum and they must be fit for transport. If not they should stay on farm.”

A farmer who doubts an animal is fit to transport should err on the side of caution and keep the animal on farm.

A Palmerston North man has been jailed and his wife fined $30,000 after pleading guilty to a total of 20 charges relating to the abuse of cows and calves in their care.

Scabby mouth a scourge, but treatable

New regulations on caring for cows while they are off-paddock have taken effect.

The code of welfare for dairy cattle has been amended to address behavioural needs and off-paddock systems, says the National Animal Welfare Advisory Committee (NAWAC).

Knowing how to give calves the needle

Most farmers are well prepared for the new disbudding and dehorning regulations which will take effect on October 1.