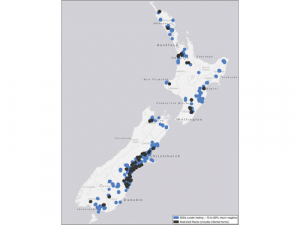 A BiosecurityNZ map showing properties under M. bovis controls as at January 11, 2019.

A report due to be officially released in a few weeks from MPI’s Mycoplasma bovis technical advisory group (TAG) is expected to confirm the TAG’s optimism that the disease can be eradicated.

An interim verbal report from the TAG has already been presented to the Government in December, when it was welcomed by Prime Minister Jacinda Adern, Agriculture Minister Damien O’Connor, DairyNZ and others.

MPI M. bovis incident controller Catherine Duthie said the TAG, made up of local and overseas experts, met late last year to look at how the phased eradication approach was working and to form an opinion on whether eradication was still considered technically feasible.

Duthie said their report was being finalised and would be released in the coming weeks.

“Late last year the TAG chair gave a verbal briefing, reporting that the TAG members feel substantial progress has been made towards eradication so far and that they are more optimistic than they were six months ago that eradication is feasible,” she said.

“They have drawn confidence from the recent national spring bulk milk testing programme and calf rearing survey and from the genetic analysis showing that we are dealing with a single and recently introduced strain of M. bovis.

“While the hard work is underway right now and expected to continue over the next two years or so, surveillance and testing will be ongoing for a few years yet before we can say New Zealand is free from M. bovis. We have a long way to go yet but it’s reassuring to have this endorsement that we’re on track,” said Duthie.

She said MPI will keep farmers and their families at the centre of all its efforts as the eradication proceeds.

“I am always conscious that farmers whose properties are connected to the trace network -- especially those who are put under movement controls -- are experiencing a challenging time and many are still dealing with the effects of these controls. While these farmers can take heart that their efforts have not been in vain, we know a number of people are still doing the hard yards and this news may be of little consolation to them.”

Duthie said people could expect to see the momentum continuing throughout 2019.

Following the December interim report, Prime Minister Adern said the eradication response was making substantial progress. “The TAG is more optimistic than six months ago, having confirmed that evidence shows we are currently dealing with a single and relatively recent incursion from late 2015-early 2016.

“The response started nearly 18 months ago and as the coalition Government and the farming industry learns more about the disease, processes may change, but at this stage I have confidence the approach we are taking to eradicate is the right one and we remain committed to this,” she said.

Two testing programmes aimed at gauging the spread of the disease have returned no undetected clusters. The spring bulk milk testing on all 11,300 dairy farms has identified only three infected properties that were already known trace properties, and to date there have been no positive test results in the beef calf rearing survey.

“Based on all the evidence presented to us, we are confident that eradication is possible and that we are on track to preserve the value of our national herd and economic base,” said Damien O’Connor.

A recent MPI report says 251 properties are now under some form of control because of the disease.

51 farms previously logged as IPs have now been destocked, cleaned and cleared to resume farming.

In addition to the 62, another 189 properties are listed as under a notice of direction (NOD), which imposes some restrictions on stock movements from the property, and is usually imposed when test results are pending. MPI says 70-80% of NODs are lifted following negative test results.

An MPI Biosecurity map of the affected properties, also dated January 11, shows only Bay of Plenty and the South Island West Coast are free of affected farms. NODs have previously been in force on the West Coast but have since been lifted.