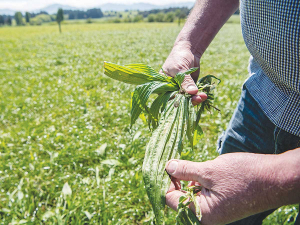 Plantain has positive effects on milk production and in reducing nitrate leaching.

Plantain varieties have been used on NZ farms for some time, with positive effects on milk production and in reducing nitrate leaching.

Following the comprehensive research programme Forages for Reduced Nitrate Leaching (FRNL), plantain has been included in OverseerFM as a pasture type on pastoral and cut and carry blocks.

“For the first time, farmers considering sowing plantain can compare estimates of their farm’s nitrogen losses before investing time and money. Also, those who already use plantain can have it recognised in their farm plans,” says Dr Caroline Read, chief executive of Overseer Limited.

“There has been a lot of interest in exploring the impact of adding plantain to farm systems or including it in compliance reporting.”

Depending on the proportion of plantain in the animal’s diet, less excreted nitrogen ends up in urine and urine volume increases, resulting in urine patches with less nitrogen – which is better for the environment.

How large the environmental effect is depends on the farm’s situation, e.g. scale of plantain use, amount of supplementary feed used, soil type and climate.

The FRNL programme was led by DairyNZ and funded by the Ministry of Business, Innovation and Employment (MBIE) and research partners DairyNZ, AgResearch, Plant & Food Research, Lincoln University, Foundation for Arable Research and Manaaki Whenua-Landcare Research.

First, FRNL assessed the impact of Ceres Tonic plantain and other forages and identified that plantain reduces nitrogen leached. Overseer has spent the last year working with AgResearch scientists to translate the FRNL findings into OverseerFM.

“Including plantain in Overseer ensures farmers can have the good work they are doing acknowledged as part of compliance processes,” said Dr Ina Pinxterhuis, DairyNZ senior scientist and FRNL programme lead.

Further research is planned to better understand the effects of plantain on nitrogen processes in the soil, said Pinxterhuis.

Overseer Ltd says it welcomes the recent launch of an independent review of its environmental modelling software and is looking forward to working with the review panel.