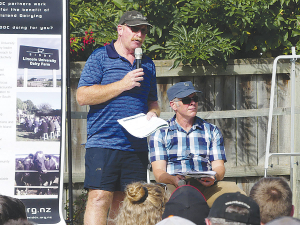 Farm manager Peter Hancox told a recent February Focus Day that the farm decided a year ago to use no bulls anywhere in the herd for the coming season.

Hancox said using no bulls in the yearling heifers was “quite a challenge,” as they were on a property some distance away at Ashburton. Travelling every day wasn’t an option, so they did four rounds of CIDRs (controlled internal drug release) to co-ordinate oestrus.

“It wasn’t overly successful. We ended up ended up with 28% of them empty at the end of doing it. It was really labour-intensive as well.”

Wet weather was also “quite challenging” because they often found themselves trying to put kamars and tail paint on wet heifers.

“It didn’t go well. They had chewed most of the kamars off by the time we went to mate them, as they do.”

Hancox said they switched from kamars to scratchies, which worked a lot better.

“That was a lesson learnt. We will definitely be using scratchies in the heifers in the future; not that we’ll be doing another SIDR programme.”

As in the previous season, main herd mating started one week early with a week of sexed semen. That was followed by three weeks of premier sires then 6.5 weeks of short gestation semen.

That regime will mean that every single cow will calve by the end of September “which will be a bonus going forward,” said Hancox.

However, it was a challenge for staff to pick up heats every day for 10.5 weeks.

Hancox said he is happy with a 71% six-week in-calf rate, which compared with 63% three seasons ago and 66% last season.

“We would’ve liked it to have been better but probably it was not too bad given some of the results we’ve been hearing.”

However, of 35 carry-overs only 14 got in calf. Hancox said carry-overs generally did well if a bull was run with them, so that result was disappointing.

Asked how many bulls LUDF would use next year in its carry-overs and heifers, Hancox replied, to some laughter from focus day attendees, “Definitely some.”

There was “quite a good possibility” that they would also go back to using bulls in the milking herd, he said.

“Being able to use that short gestation is quite powerful, but that’s one of the discussions we’ll have to have going forward.”

Meanwhile, Hancox said in a review of the season that the winter grass had been of very high quality and enabled the cows to go though spring and calving extremely well. There had been only four losses since June.

A wet spring and early summer meant very good moisture levels. The farm irrigated only four days before Christmas and only 35 days for the whole season so far, making for “quite a good saving”.

With 542 cows now in milk he expects to end the season with about 500kgMS/cow.