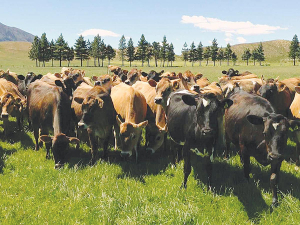 It is estimated to cost the New Zealand cattle industry $150 million in direct production losses each year.1

“Persistently infected” (PI) cattle are the main source of BVD spread; these animals were infected with BVD before birth, when their immune system was still developing. They shed high levels of the BVD virus in their blood, saliva and faeces for their entire lives. PIs spread BVD by having direct or indirect (via saliva or faeces) contact with naïve animals. When a naïve animal is infected with BVD, it will usually recover in 2-3 weeks.

However, during this “transient infection,” cattle may experience pregnancy loss, reduced growth rates or milk production, or any number of secondary infections.

Because PIs are the main source of BVD, controlling BVD relies on finding and eliminating PIs from within your herd, then protecting your herd from contact with outside PIs to prevent reintroduction of the disease. Effective BVD control plans require: monitoring the herd, finding and culling PIs, improving biosecurity, and strategically vaccinating ‘at-risk’ cattle.

Last month, we addressed how to monitor the herd and test individual animals to find PIs so they can be culled. These two steps of a BVD control plan allow you to eliminate the disease from your farm. The second half of the puzzle is to prevent re-introduction of BVD by improving biosecurity and strategically vaccinating at-risk animals.

The largest management risk factors for BVD are: 1) bringing outside cattle onto your farm without testing them for BVD, and 2) allowing your cattle to have frequent over-the-fence contact with animals of an unknown BVD status2.

• test all purchased/leased animals, including service bulls, before they arrive on-farm

• clean and disinfect boots and equipment when moving from one group of cattle to another.

Frequent animal movements and the high density of cattle in New Zealand mean that most farms cannot eliminate their BVD risk. So, BVD control also requires vaccination of at-risk groups of cattle. Effective vaccines, such as Bovilis® BVD, prevent the formation of PI calves inside pregnant animals and reduce the impact of transient BVD infection on naïve animals.

Work with your vet to identify groups of “at-risk” animals, and fully vaccinate them prior to when they could have PI contact. ‘Fully vaccinating’ with Bovilis® BVD means giving two doses of vaccine,
4 weeks to 6 months apart in the first year, then an annual booster for ongoing protection.

Groups of animals requiring vaccination for BVD control include:

*Even on farms with low BVD risk, all service bulls should not only be tested to ensure they are not PIs, they should also be completely vaccinated before mating. Bull testing and vaccination is a low-cost insurance policy, because transient BVD infection reduces sperm quality for months. If a bull becomes sick with BVD, the entire mating season could be ruined.

BVD control is good for your animals and good for your bottom line. Monitoring the herd, finding and culling PIs, improving biosecurity, and vaccinating at-risk groups of cattle are the steps of an effective BVD control plan. For more information about BVD control, speak with your vet or visit www.TopFarmers.co.nz for BVD videos, fact sheets and more.

Traditionally, bovine viral diarrhoea (BVD) has been considered a disease of cattle. But lately it has been found to cause infections in sheep, deer, alpacas, llamas and pigs.

CRV Ambreed has appointed a new laboratory to enable New Zealand dairy farmers to gain access to further information about BVD and Johne’s Disease from their herd testing.

Almost $1 million will go to projects aimed at combating animal diseases from the Ministry for Primary Industries’ Sustainable Farming Fund.