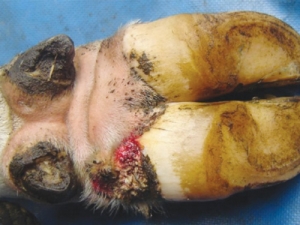 Digital dermatitis is the most serious infectious cause of lameness in dairy cattle worldwide.

The classical lesion of digital dermatitis is a moist ulcer, Laven says.

However, digital dermatitis is a cyclical disease with lesions forming, healing and then returning, so it has multiple stages. The most persistent stage (often called M4) is a chronic thickening of the skin with rapidly spreading growths which can often resemble hairs (in some countries these are called hairy hoof warts).

In NZ the most common appearance of digital dermatitis is a small lesion less than 1 cm in size.

Larger lesions, either when they develop into ulcers or when they are growing, tend to be extremely painful

Digital dermatitis was first identified in Northern Italy in 1974, and is now reported worldwide.

The first NZ case occurred in 2004, with sporadic reports until around 2011 when the number increased markedly.