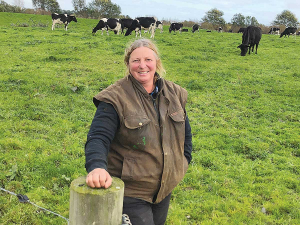 Helen Cummings on her farm.

The COVID-19 pandemic has effectively brought forward the appointment of Southland dairy farmer Helen Cummings to the national board of the Holstein Friesian NZ Association.

Nominated unopposed to represent Ward 8 (Otago/Southland) in the recent director elections, Cummings’ appointment would normally have taken effect at the annual general meeting during the annual conference in Whangarei in June, but both the AGM and the conference have been cancelled.

Instead, she and the other board members are already getting into their work over Skype.

It’s an opportunity the passionate Holstein Friesian breeder is relishing.

“I was asked to be nominated as the board member for the Otago/Southland region, so I thought I’d give it a go,” she said.

Helen lives on a 106ha dairy farm at Wyndham, milking a herd of 235 predominately Holstein Friesian cows with a full-time employee, Cherie McMullan, while her husband Jock works in town.

Helen and Jock have been members of Holstein Friesian NZ for almost 20 years.

“I became secretary of the Southland branch two months after we joined. I took over as president about six or seven years ago,” she said.

“Joining the national board will be an opportunity for me to grow my own skills and learn more about key aspects of the association.”

The couple breed pedigree animals under the stud name Mayalan Holsteins - a mash-up of Rowalan, the name of Helen’s parents’ farm, with May, the month Helen and Jock bought their first Holstein.

Helen believes there are significant advantages to the breed.

“There are big production benefits with using Holstein Friesian bulls over your herd,” she said.

Meanwhile the cancellation of the Holstein Friesian NZ conference and AGM for this year puts back the association’s annual conference rotation by 12 months, so Northland will now host it in 2021 and Manawatu in 2022.

Helen Cummings’ appointment caps off a busy time on the farm, which borders the Mataura River and was badly affected by the big floods of early February.

“We’ve been here 12 years and I’ve never seen a flood that bad. Almost 80% of the farm went under water,” recalls Helen.

Helen and McMullan spent five to six hours a day since the flood cleaning up paddocks.

“We have 42 paddocks. We’ve had to pick up sticks, rubbish and clear massive branches and entire trees from 36 of them,” she said.

About 300 new posts, 50 strainer posts and 7.5km of new wire have been needed to repair fences and ensure they are stock-proof again.

Helen called it a hard two-month slog which only finished in mid-April.

But she praised the way neighbours and the Southland community worked together in the days following the disaster.

“We had 23 friends and family turn up on the Saturday following the flood to help with the clean-up and 26 people on the Sunday. It was truly humbling. It’s likely the effects of the flood will be felt into next season,” she said.

“Plus, there were several members of the Farmy Army – a volunteer group organised by Federated Farmers – and a team from the Gore A&P Society, where Jock is president.”