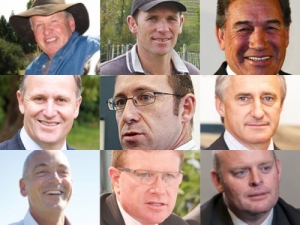 Rural News' irreverent and hypothetical look at what's happening in the farming world.

@jmccarthymie: I'm absolutely mystified how both MIE's remits at this year's BLNZ annual meeting failed to gain farmer support. Quite clearly more than 76% of sheep and beef farmers in this country are stupid, irresponsible, foolish, fatuous, dim and brainless. #ungracious #insolent #bastards

@jparsonsblnz: I am not one to gloat, but in your face MIE! Flag change support was more than double that for both your remits at our annual meeting and it still lost. So take a hint, fold up your tent and go away. #giveitup

@winstonfirstandlast: Thankfully the majority of voters – like me – believe in a New Zealand that is firmly tied to the 1950s: with unbreakable bonds to Mother Britain, septuagenarian politicians running the show, five-day-a-week trading and a whites-only immigration policy. #thegoodolddays #rulebritainia #godsavethequeen

@johnkeypm: At the end of the day, my efforts to change the flag flagged. But hey, the Blackcaps are doing well in the T20 World Cup and there's not a Union Jack in sight on their uniforms. #whenlosingiswinning

@littleandylabour: I blame John Key for the banks foreclosing on bad loans, Fonterra not paying at least $8/kgMS and the utter rejection of his new flag. Under a Labour government, banks will not charge interest, Fonterra's payout will average $50 and we'll change the flag to one everybody loves. #mydreams

@drbillfeds: I didn't realise Hawkes Bay was so full of smelly hippies who support a GM-free zone; obviously they have a similar scientific fantasy to anti-fluoride and anti-immunisation nutjobs. #losers

@jwilsonfonterra: Let me assure farmers things will get better: the sun will come up tomorrow, one day it will rain in sunny Southern California and we're 99.999% confident Christmas will happen again this year. In the meantime, we have no idea what is going on with milk prices. #yourguessisasgoodasmine

@dcoullshc: Hi @jwilsonfonterra can I just say what a wonderful job you, your board and executive are doing on behalf of Fonterra shareholders. Thanks to all your efforts none of us will be paying tax this year! Love your work. #lapdog #yapyap