Touring around in comfort 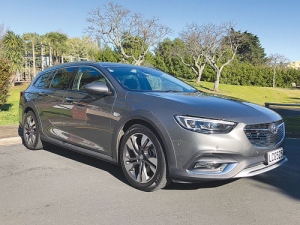 The Calais-V Tourer is no off-roader.

Okay Holden, you’re not fooling anyone with your raised ride height and plastic wheel arches; the Calais-V Tourer is no off-roader.

But that’s okay because most of us don’t even take our real SUVs on any surface more taxing than a dirt road or grass verge anyway. And the Tourer does a great job of what it is really designed to be, a luxurious executive express.

Unlike the Subaru Outback, this range-topping wagon from Holden does not have the ground clearance to tackle real rough stuff. Think of it more as an ‘all road’ vehicle than off-road.

Some Australian journalists have tried taking this off road but didn’t get very far.

The lift in ride height is a bit token, as are the rugged plastic bits, however the overall effect gives the car a purposeful stance. It’s a great looking package and the Tourer treatment sets it apart visually from the lesser rep-mobiles in the Commodore range.

The technology underneath also impresses, especially the torque vectoring all-wheel-drive system which makes the Tourer far more athletic than you’d credit for a big car. Ride quality is great, the extra suspension travel absorbing anything New Zealand’s variable road quality can throw at it. That’s not surprising as the Commodore range spent its formative months being tuned for Australia’s also-crap roads.

Mumbo comes from a 235kW, 381Nm V6, via a 9-speed automatic transmission and all-wheel drive – a powertrain suited to a luxury express. Plenty of power when you need it and effortless for the other 95% of the time. And traction to burn, making light work of wet conditions and gravel roads.

A powered tail-gate rises to reveal a massive boot. Forward of that is spacious accommodation for five, although it’s not quite as wide across the back seat as the previous all-Australian Commodores.

Well suited to family life if you want a versatile, big wagon but don’t want an SUV.

Global GPS specialist Topcon has raised the bar in launching its Auto-Turn and Steer-to-Boundary functions in some of its GPD guidance kits.

These were until recently available only with guidance packages from mainstream tractor manufacturers. Designed to work with version 4.02 of the horizon software used in the X25 and X35 consoles -- as the name suggests -- Auto-Turn allows tractors, sprayers and headers to make fully autonomous headland turns, choosing alternating, in-fill, and single-direction in-fill patterns.

The system works by looking at implement dimensions, comparing it to space available at the headland, then calculating the best turning path to position the vehicle accurately for the next pass or bout.

The Steer-to-Boundary function works by guiding the vehicle along a pre-recorded field boundary, while understanding the implements working width to ensure full ground coverage.

Both functions can help reduce soil compaction on headlands, as they allow precise, repeatable wheel placement for each operation, in effect not dissimilar to a controlled traffic regime.

Steer-to-Boundary is offered as a standard feature with the Horizon 4.02 software, while Auto-Turn is a paid-for upgrade. – Mark Daniel