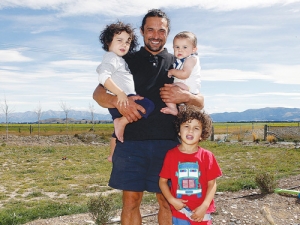 Ngai Tahu Farming’s Hemi Dawson, pictured here with his three sons, says it’s all for the next generation.

Hemi Dawson says Ngai Tahu Farming have to set the standard everyone aspires to because their mana is at stake.

He says Maori have to be the strongest voice for the environment; Ngai Tahu Farming must not contribute to the degradation of waterways. He believes this will change the general population's perception of farming and then they can engage the population so they can be part of the process.

On each farm there is a mana whenua working party involved in governance and they hold you accountable, Dawson said. This imposes stricter guidelines for Dawson than on many other farms.

The hapu also put conditions on how the farms operate; for instance, no palm kernel extract, no dead-cow holes, water use must be optimised and each farm must forge sustainability.

Dawson describes himself as an instinctive farmer; he keeps his eyes open and makes sure he has his finger on the pulse of his farm.

He manages 250 effective ha and milks 900 cows. His initiatives on the farm include planting 21,000 native trees and he has cut nitrogen use 100 units lower than the hapu stipulated.

Every dollar not spent adds to the bottom line, so Dawson tries to make the best of money spent. He says the requirement to satisfy iwi expectations is more of a challenge than would rise in a regional council because their fiercest critics come from within the tribe.

He enjoys being a mentor more than a manager; he doesn't put himself out there, and instead will push one of his workers out in front to challenge him. He enjoys passing on knowledge, making them learn and getting the staff to tell him what they are doing on the farm.

He is heavily involved in the Whenua Kura programme Ngai Tahu has set up as an agricultural school. The iwi recently bought the nearby Eyrewell lodge to house students.

Bag of ‘tools’ to save environment