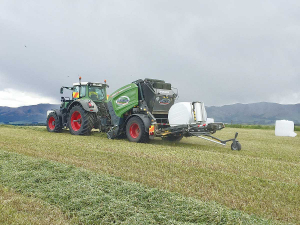 South Canterbury-based Kinsman Contracting employs 13 to 14 permanent staff, with numbers swelling to more than 30 with additional truck and tractor drivers during peak season.

Most employees live locally, although each year, three or four overseas workers join the team.

Grant Kinsman, who was born and bred on a farm near Waimate, has been an agricultural contractor for 25 years. His business offers a full range of agricultural services including drilling, ploughing, round and square bales of silage, and silage chopping.

“There’s not much we don’t do, with agricultural work from August onwards and silage and maize until the end of April,” he says. “As the silage starts to slow down from January. We also dig 700 to 800 hectares of potatoes, which carries us through to the end of June, allowing us to extend the season and keep full-time staff.”

When it comes to baling, Kinsman has used the same well-proven baling technology for nearly two decades. Having started with Welger 18 years ago, he moved to Lely machines, basically the same product, which proved to be reliable.

“They are very efficient balers, that got the job done and allowed us to make good bales for the farmer,” he says. “Back in those early days, there were a lot more sheep around, so our clients were mostly sheep and beef farmers. These days it’s about 70% dairy and 25-30% sheep and beef.”

So, when AGCO acquired the Lely brand, it made sense for Kinsman to stick with a brand he knew and liked. In 2019, he bought two Fendt balers, a Rotana 4160V combination baler/wrapper and a 4160V baler to accompany a three year old Lely RP 4160V machine.

The Rotana combination is powered by a Fendt 718 or 828 tractor, while the standalone balers are powered by a 718.

“We do have a lot of steep hill country that we work in, so we use the Fendt 828 to haul the combi around,” Kinsman says.

All three variable chamber balers make bales that vary from 0.9m-1.6m diameter and feature the Constant Pressure System (CPS). This applies pressure to the bale in the chamber to maintain constant density as the bale diameter increases during baling.

Along with high baling densities, the Fendt Rotana 4160 baler-wrapper has precise cutting, reliable wrapping and a quick discharge, that combine to produce top quality silage.

Kinsman believes one big improvement Fendt has made is a redesign of the transfer system that takes the bale from the chamber to the wrapping platform, which works particularly well on hillsides. Drivers also like the new ISOBUS monitor, which AGCO reports it has also received positive feedback on from farmers and contractors from around the world.

Kinsman Contracting mainly produces baleage from grass and some whole crop, using a tube wrapper to wrap the bales that are produced by the standard 4160 balers.

“I prefer variable chamber over fixed chamber balers because they make bales that are solid from the centre out and rolled from the start the whole way – so are also easier to feed out,” Kinsman says.

“I feed a few animals myself, so I know from experience that variable bales are better to work with.

Kinsman has high praise for his local dealer JJs Ltd of Timaru for a quality back-up service.

“Having a good local dealer makes a big difference,” he says. “You are not just buying the product, it is all about the back-up service. It doesn’t matter whether a machine is brand new or older, it still needs good back-up service to keep it running. It doesn’t make money sitting around doing nothing.”

An airline pilot may soon be landing in a paddock near you, driving a harvester.

An estimated 28 million tonnes of crop worth $110 million will be at risk if overseas machinery operators are not allowed into the country, according to a new survey.

OPINION: Crunch time is approaching for the country’s agricultural contractors.