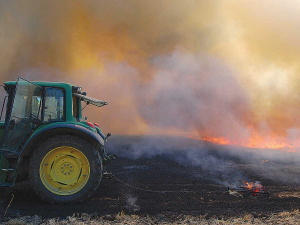 Are you using best practise around crop residue burning?

Environment Canterbury South Canterbury Operations Manager Judith Earl-Goulet said ECan was liaising with FAR to send out information to farmers. It will cover industry best practice, Fire and Emergency NZ (FENZ) permitting rules, and ECan requirements under the regional air plan, so all the information was in one place.

Earl-Goulet explained that FENZ’s responsibility was around the safety of property and people. Stubble burning may be allowed – depending on whether a district was in an open, restricted or prohibited season – and FENZ permits could now be applied for under a new online system.

She says ECan’s responsibility was around air quality and smoke nuisance effects.

“You have to have a smoke management plan to address that you’ve thought about what conditions are,” Earl-Goulet told Rural News.

“You can still do it, but it has a few a bit more rigour around the checks and balances because of the effects in close to those communities,”

Earl-Goulet said various agencies met in mid-December to discuss concerns that arose last season, when a wet February was followed by a “tight two weeks” in March where conditions were finally suitable for residue burning and a lot was carried out in South Canterbury.

Earl-Goulet said that while the guidelines called for burning on calm days when there would be “nice vertical smoke” there was one incident where the smoke engulfed a road and another where smoke from a burn near the coast went upwards.

It then blew inland until it was blocked by the Hunter Hills and descended into the Waimate township, despite it being a long way from the burn.

“You had the community of Waimate really frustrated that their summer evening was spoilt by the effects of the smoke.”

“It’s just one of those examples of when it goes bad it can create anxiety in a community thinking something’s happening but actually, the right checks and balances have not been followed.

“That activity is under investigation at the moment.”

Earl-Goulet said the rural industry had a role to play in educating the public.

“You need to be explaining why this is better than herbicides and pesticides being used. That’s not a role for FENZ or ECan.”

“Effectively it puts a legal connection between the farmer lighting the fire and Fire and Emergency as the manager of fire, with the farmer legally confirming that he would adhere to the terms and conditions,” he told Rural News.

“Quite frankly, if you’re not prepared to adhere to the terms and conditions then you shouldn’t be allowed to light the fire.”

“That’s an automated process and it’s easy and there’s no excuse not to comply with it,” said Clark.