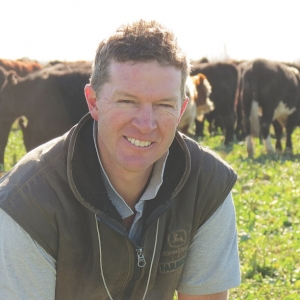 THE NEED to get skills to manage his staff prompted Hawkes Bay’s Will Foley to put himself on a Federated Farmers leadership course. Now, at 36, he’s the federation’s youngest provincial president.

Foley manages four of his family’s farms in central Hawkes Bay, near Takapau. These include a hill country property with 5000 breeding ewes and three other farms, good winter performers.

He was born on one of the farms. Leaving school Foley began veterinary studies but changed courses and completed a B Ag. After that he returned to the farm.

“My grandfather had a contracting business in the 1940s which my father was still running so that was our main focus for five to six years. We had the farms running in the background, but just looking after themselves, so to speak, so we were doing long hours on tractors – grain harvesting, hay and baleage and direct drilling.

“In the early 2000s, we decided the contracting business was going well. But we had these farms that had a lot more potential so we decided to merge them into one business and try to crank them up and get them earning to their potential. I was working with my brother at that stage and he stayed focused on the contracting and I moved more to the farming side, which was certainly more my passion.”

As he started to manage the farms, Foley realised he needed more skills and opted to put himself on one of the leadership courses Feds runs regularly.

“I guess while we’d always been Feds members, I hadn’t taken a lot of notice of what they got up to other than appreciating the results achieved on our behalf. I saw it as a chance to go to Wellington and learn. It was also beneficial learning what Feds got up to down there (Wellington) and it opened my eyes to something I enjoyed.”

A couple of days after returning to Hawkes Bay from the course, Foley got a call from the provincial president Kevin Mitchell to come to a local meeting and talk about the course and what he was doing. By the time he left the meeting he’d been made local chairman of Meat and Fibre, taking over from Bruce Wills who was then national chair of Meat and Fibre.

“I’ve been involved in the Hawkes Bay executive ever since. I have really enjoyed going down to the conference and the council once a year and through this have learned more and more what Feds gets up to and does on members’ behalf.”

Today Foley has plenty on his plate as the new provincial president. The region has been badly affected by drought, but is also in the midst of a debate about a new water scheme – the Ruataniwha Water Storage Scheme which would see a 91 million m3 reservoir constructed on the upper Makaroro River. The aim is to irrigate up to 30,000ha.

Foley recognises while some favour the scheme, others are not so sure. He’s a fan of the concept, but needs to talk to many people including affected farmers before championing it. He acknowledges farmers will invest in the scheme if there is financial benefit and says current sheep and beef farmers will have to change their farming systems if they do invest. He knows that at just 36 years he has a lot to learn from the old hands at Feds, but is keen to test his ideas and gain experience. His philosophy is to enjoy the farming life in a way that is sustainable and profitable.

Organisers behind the Farmy Army, a clean-up group operating in flood-ravaged Southland are calling for volunteers.

Farmer confidence up but looming costs remain a worry

Farmer confidence is up but they doubt general economic conditions will improve this year, says Federated Farmers.