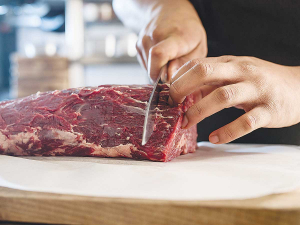 JBS will use the Bovaer feed additive to improve the greenhouse gas footprint of its beef production.

JBS says it will use Bovaer, a product from Dutch conglomerate Royal DSM, to improve the greenhouse gas footprint in the beef production value chain.

The feed additive is also being trialed on New Zealand farms in a Fonterra/DSM partnership.

The additive is a synthetic chemical compound called 3-NOP, which has been studied for many years in cows fed in feedlots.

In Australia, Bovaer was recently evaluated as part of a Meat and Livestock Australia-funded project on reducing methane emissions in Australian feedlot operations.

DSM plans to launch the product in Australia early next year. It says the development of Bovaer took place over 10 years, with 45 on-farm trials in 13 countries across four continents, which resulted in more than 48 peer-reviewed studies published in independent scientific journals.

In September, Brazil was the first market to grant full regulatory approval for Bovaer.

Bovaer is added to animal feed. A quarter of a teaspoon of the additive a day, per animal, inhibits the enzyme that activates the production of methane gas in the stomach of the ruminant. According to DSM, the effect is immediate. However, if use is interrupted, methane gas emissions is fully resumed.

DSM and JBS will jointly develop the implementation of Bovaer in the production chain. The objective is to promote a transition of the global beef industry, through nutrition, and a safe path to reduce methane emissions.

"We are developing a major action plan to reduce the company's entire carbon footprint, and this partnership with DSM will contribute not only to our plans but for the whole sector in this complex issue of methane emissions," says Gilberto Tomazoni, global chief executive of JBS.

To achieve this goal on a global level, an end-to-end program will be developed to test the supplement in JBS' operations. Initially, the nutritional solution will be provided at cattle feedlots. After six months, the tests will be expanded to a second market, which could be either Australia or the United States, two of the JBS's biggest operation worldwide.

The plan includes developing methodologies to create assessment tools throughout the entire cycle of the JBS chain, with the technical participation of academic and research institutions.

Bovaer OK for use in Brazil, Chile

A new methane inhibitor showing promising results overseas is now being trialed in New Zealand with the backing of Fonterra.

The Australian Government has approved the sale of the country’s largest ham and bacon producer to Brazilian meat giant JBS, despite farmer concerns.