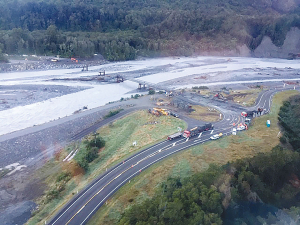 An aerial view of the work site where Downer and Army engineers are preparing the Bailey bridge replacement for the washed-out State Highway 6 bridge at Franz Josef. Supplied/DOWNER.

The river, fed by the Franz Josef Glacier, burst its banks in late March as torrential rain washed away the State Highway 6 bridge, just south of the township, and damaged downstream stopbanks and farmland on the river’s old floodplain.

Army and Downer engineers are urgently replacing it with new Bailey bridge spans and it is expected to be usable again by mid-April.

The bridge had been raised to cope with the river bed rising because of accumulating gravel (‘aggradation’) -- a phenomenon believed made worse by the stopbanks restricting the river’s flow.

The flood highlights a suggestion that for the river’s long-term management the stopbanks should be removed so it can re-occupy its flood plain.

Smith said the suggestion was contained in just one of many reports to the West Coast Regional Council.

“It’s been driven by the regional council but... a full analysis of the economic cost hasn’t been done.”

“We’ve got 18 kids who live on the south side and they’re a significant part of retaining teacher and class numbers in the local school.”

It is a bigger community than some other Westland settlements such as Bruce Bay and Okarito, he said.

“It’s significant, and its contribution to the [economy] of Westland is important. If you abandon it will Westland Dairy continue to collect milk from Fox? Because the volumes would be right down. A whole lot of questions need to be answered.”

More people had been evacuated after a second bout of heavy rain because of damage to the south side (Milton) stopbank and Smith said locals want it rebuilt urgently.

Meanwhile, getting milk out and supplies in remains a problem for farms cut off by the washed-out bridge.

With road access only via Haast Pass, milk tankers from Open Country Dairy in Southland are collecting milk from the four Waiho River flats dairy farms and from Kerry Straight’s farm about 20km further south near Fox Glacier. Straight’s is the only dairy farm – among several beef units – on the Fox River flats.

With his phone and internet knocked out for a few days after the rain, Straight was relieved to see the Open Country truck arrive, meaning he did not have to dump milk. “We came very close to it but managed to avoid it,” he said.

The farm has frontages on the Fox River and the smaller Cook River, both of which burst their banks in the storm, washing away a few hectares of land and two or three km of fencing.

Straight said “the one thing” farmers in the district need is access to rock for river protection. An engineer had estimated that Straight needs 6000 tonnes of rock to repair one section of his Cook River frontage, but the only approved rock supply was from Whataroa, about 50km to the north and still cut off by the lost bridge.

“There’s any amount of rock in our rivers but they won’t let us touch it.”

Straight says all his usual connections are to the north and he is looking forward to getting the Waiho Bridge back.

Meanwhile he is getting small amounts of supplies including fencing wire across the Waiho by the shuttle services set up by local helicopter operators.

“Fertiliser and lime and stuff like that will become a major issue if [the bridge] stays out too long. And getting stock away — most of our stock goes north, culls and so on. But obviously they can go south if we have to.”

Leslie said damage to farm infrastructure had, fortunately, been limited -- mostly to fences.

“It’s unclear at this stage how much damage has been caused to pasture but we have had reports of loss of topsoil.”

No stock had been reported affected.

“Fortunately, farmers had time to prepare and many moved cows to higher ground and away from rivers.

“Farmers on the coast are a resilient bunch and will get through this but I encourage them to tap into the resources and support available to help,” she said.

How to body condition score