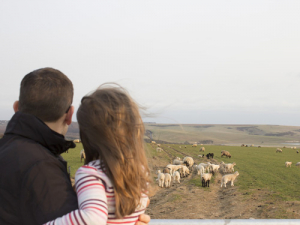 Living on a farm in early childhood is linked to a lower risk of allergies as an adult and stronger lungs in women.

Living on a farm in early childhood is linked to a lower risk of allergies as an adult, and stronger lungs in women, than growing up in either a rural or urban area, finds research published online in the journal Thorax.

The findings are remarkably consistent across 14 countries, suggesting that common biological factors, rather than social or cultural ones, may have a role to play, say the researchers.

Various theories have been suggested to explain the sharp rise in the prevalence of asthma and allergies over the past few decades, with recent research pointing to early childhood exposure to a wide variety of potential allergens and microbes as possibly protective—the so-called hygiene hypothesis.

But it’s not clear whether growing up in any one type of environment is key or whether it’s the diversity of microbes a child is exposed to early on that might count.

To find out, the researchers drew on the European Community Respiratory Health Survey II, which included more than 10,000 people aged 26 to 54 from 14 countries in Europe, Scandinavia, and including Australia between 1998 and 2002.

Participants were asked where they lived before the age of 5—on a farm; in a country village; in a small town or city suburb; or inner city.

A ‘biodiversity score’ from 0-5 was calculated for each of them, based on their reported exposure to pet cats and dogs; older siblings; other kids in day care/nursery/ school; and how many other children they shared a bedroom with.

Their lung strength and antibody (IgE) levels were tested and they filled in a questionnaire on allergic symptoms, including nasal symptoms, asthma, hay fever, wheeze, and bronchial hyper-responsiveness (over reactive airways).

Nearly two thirds (64%) of the study participants had lived in a rural village, small town, or city suburb before the age of 5. Around one in four (27%) had spent their early childhood in an inner city, and almost one in 10 (9.2%) had lived on a farm.

Kids who grew up on a farm were more likely to have had pets, older siblings, and to have shared a bedroom in their early childhood. And a family history of allergy was less common in this group.

As adults, farm kids were less likely to be sensitised to allergens, have nasal symptoms, or to have over reactive airways than those living in any other environment.

Farm kids were also 50% less likely to have allergic or non-allergic asthma than any of the other groups.

There was little overall difference in lung strength among the groups after taking account of potentially influential factors.

But women who had grown up on a farm did have stronger lungs than those who had lived in an inner city before the age of 5, and this was pretty consistent across all 14 countries.

Different responses to a range of environmental factors, might explain this gender difference, say the researchers. Or it may be that men are exposed to potential allergens for longer periods, which then becomes harmful rather than protective, they suggest.

This is an observational study, so no firm conclusions can be drawn about cause and effect.

And the researchers acknowledge that recall may have been inaccurate and that no objective measures of biodiversity were available for comparison. Furthermore, families with a history of allergies may have avoided farm life, so potentially skewing the findings.

Nevertheless, they conclude: “The consistency of the findings across multi-country settings suggests that farming effects may be due to biological mechanisms rather than socio-cultural effects that would differ between countries.”