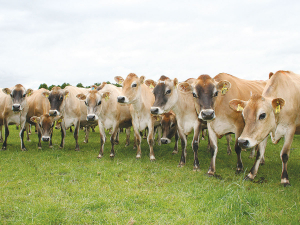 Jersey cows are shown to be more susceptible to Johne’s disease.

He says the bacteria that cause Johne’s disease (Mycobacterium avium Paratuberculosis) is widespread in NZ and infects at least 50% of flocks and herds.

But despite the bacteria being everywhere, the rate of clinical disease is very low.

“In its clinical form, Johne’s disease is chronic, progressive, contagious and generally fatal. It affects cattle, sheep, deer, goats and wildlife,” he said.

Between 2008 and 2010, the Johne’s Disease Research Consortium (joint venture of science and industry) screened at least 5000 dairy herds for the disease through bulk vat milk ELISA tests. Only 1% of herds tested positive and 5% were classified as suspect for the disease.

Ward says while this is good news, Johne’s has the potential to severely harm animal welfare and market access.

“It can also adversely affect individual farm businesses, as clinical Johne’s disease reduces the productivity of dairy cattle seasonally and across the lifetime of the cow,” he explains.

“Modelling has shown the associated reduction in milk, protein and fat yields has the potential to reduce income on a dairy farm by 6-15%.”

Ward says the Johne’s Disease Research Consortium that ran between 2008-2016 developed practical and cost effective management tools and resources for use on farm to reduce the prevalence of the disease.

After the consortium finished, DairyNZ, Beef + Lamb NZ and Deer Industry NZ joined forces to form the Johne’s Advisory Group (JAG). This working group supports and gives insight to the industry on R&D and the control and management of the disease.

Ward says JAG shows the sectors working well together in controlling and managing a disease that could devastate NZ’s red meat and dairy industries.

“While we are unable to eradicate Johne’s disease, it is important we all work together to keep [disease] levels at a minimum to protect our businesses and our respective export industries.”

In the dairy industry, bulk milk vat ELISA testing shows up as a useful tool for screening dairy herds for Johne’s. However, it should not be attempted in late lactation as raised antibody levels in milk interfere with the tests.

Research has shown that dairy cattle are most likely to test positive to Johne’s disease between lactations three and six.

Ward says tests in young stock are notoriously unreliable, so there is little value in testing calves or heifers.

“Instead management should be focused on minimising their exposure to the disease from the environment or adult infected animals.”

Young animals are the most susceptible to the disease and Jersey cows are shown to be three times more susceptible to Johne’s disease than Holstein-Friesians.

• For more information about the control and management of Johne’s disease go to https://www.jdrc.co.nz/resources