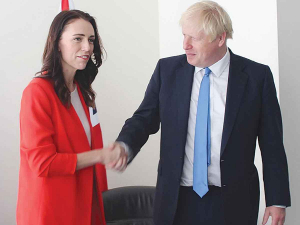 Dairy Companies of NZ (DCANZ) chairman Malcolm Bailey says a high-quality and comprehensive FTA between the United Kingdom and New Zealand will further strengthen the historic and close relationship between the two countries.

At a time when a number of countries are reverting to trade protectionist policies and subsidies, it is heartening to see like-minded countries like NZ and the UK showing leadership on trade issues, he says.

“The UK’s previous membership of the European Union (EU), one of the most protected dairy markets globally, has severely limited the opportunity for its consumers to purchase high quality NZ dairy products,” says Bailey.

“Now that the UK is able to negotiate its own trade arrangements, a UK-NZ FTA will provide important commercial opportunities for dairy sector participants in both countries.”

Bailey says the NZ and the UK dairy sectors are complementary, with counter-seasonal production systems and a shared interest in managing price volatility globally.  Both countries also place a high level of importance on food safety, animal welfare and environmental outcomes.

Bailey says the UK dairy industry is also efficient, with a long-history of competing against highly subsidised dairy exports from across the EU.

Trade Minister David Parker announced the launch of the FTA talks last week, with the first round of negotiations expected to take place by video conference from mid-July.

This comes a week after the EU made a poor offer to NZ on agriculture as part of the FTA negotiations between the two jurisdictions.

Parker hailed the start of the negotiations saying that as the UK embarks on its next steps post-Brexit, NZ is pleased to be among the first countries to negotiate a trade agreement with one of our “oldest friends”.

“We look forward to an FTA that opens up more opportunities for small and medium sized businesses, Māori exporters, and our regional communities, consistent with our ‘Trade for All’ objectives,” he says.

Parker says NZ and the UK have a close relationship, including strong trade and economic ties, common values and traditions and a shared history. He says an FTA will be an important new milestone in that relationship and adds that in the post Brexit environment, it makes more sense than ever for NZ to be working together to grow this partnership for the future.

“As the global economy continues to be severely impacted by the effects of Covid-19, we are more committed than ever to concluding a bilateral FTA capable of delivering significant benefits to the people of both New Zealand and the UK,” he says.

Both sides have committed to achieving an early conclusion to a high quality, comprehensive and inclusive trade agreement, something NZ and the EU are currently struggling to do. Britain is NZ’s sixth largest trading partner with two-way trade worth almost $6 billion last year.