Russian revolution in the dairy shed 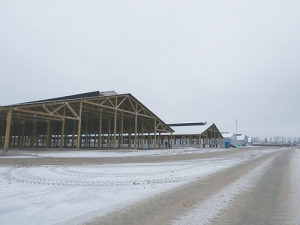 TerraNova Group, which owns several dairy farms in western Russia, in 2012 began planning to build its 4300ha Novoladozhskiy farm near St Petersburg, in the northwest of Russia.

The Novoladozhskiy farm property had been a dairy farm in the Soviet Union era, winning awards and respect, and training local farmers. The harsh climate forced its high genetic Ayrshire herd housed indoors year-round, fed a diet of silage, grown on the farm, and supplements.

But it needed new milking technology, says Trainis. “We had scale and scope not fully utilised and the president’s vision was to realise the farm’s potential by drawing on the best knowledge, systems and technology in the world.”

The plan was to double the milking herd to 2000, with a corresponding increase in output.

“Our president [listed specific] improvements needed to release the farm’s potential, and reconstructing the facilities was uppermost. The barns which house the cows are being redeveloped… to maximise herd health and welfare.

“A new farm dairy was also critical: the existing herringbone was built in 1998 and it was taking six people 5-6 hours to milk the 1000 cow herd twice daily, so something had to be done for throughput of 2000+ cows. The obvious answer was a rotary platform.

“We looked at the leading manufacturers of rotary milking systems in the world and narrowed our choice down to two. British farmers consistently talked about Waikato Milking Systems.

“Our farms in Russia are quite remote; there’s often a long distance between locations so [repairs take time].

“Waikato Milking Systems had a reputation for being a world leader in systems rigorously tested before launching; the farmers who used them found them very robust.”

“It can be a challenge importing anything into Russia…. The paperwork’s the same no matter where it’s come from and any additional cost is offset by the knowledge that you’ve bought the best.”

WMS sent its specialists to oversee the construction of the platform and installation of the technology, setting early 2015 as the start-up date.

“Our new farm dairy is one of the most technically advanced in northwest Russia, if not the whole country…. The farm’s development has already attracted a lot of interest and this will only grow as time goes on.”