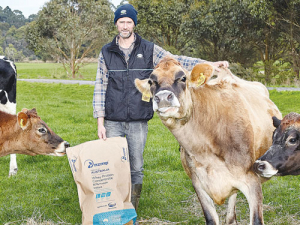 Leigh Schuuring and his wife Kellie and family farm at Smithton on the north-west coast of Tasmania beside Bass Strait.

Schuuring had never expected his farm’s milk to become a key ingredient in nourishing ageing Japanese, the co-op says. But it will be, via product made at its Wynyard factory, a 45-minute drive from the farm, starting next month (August).

Fonterra Australia’s ingredients business and a large Japanese food maker will use the milk-derived product in a whey protein concentrate (WPC) for dairy beverages, yoghurt and snack bars for the Japan market.

Fonterra Australia managing director Rene Dedoncker says the WPC made from cheese whey was developed for the Japanese customer in about a year with input from the co-op’s Australian research and operations teams.

“It’s an example of how we are getting higher value out of Australian farmers’ milk and taking it to the world,” he says. “Health-conscious Japanese consumers are turning to protein food and beverages for better health and longer life.”

The Japanese know nutrition can influence good health, he says. They have the highest life expectancy of any country, research suggesting this is largely due to healthy diet.

Dedoncker says Australia is seen as a trusted and safe source of dairy due to its clean, green reputation for food safety and quality.

“We have access to over 100 markets and 30% of the milk we collect in Australia is exported as nutritional powders, milk and protein powders and cheese. Growth prospects for dairy protein ingredients in Asia are strong.”

The global protein ingredients market is forecast to grow by at least 7% to US$43.3 billion by 2024.

“You don’t always think about what happens to the milk once it leaves the farm. Knowing where it goes gives us a sense of accomplishment,” he says.