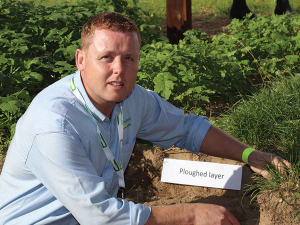 The expansion of the dairy industry in Ireland is starting to affect the environmental health of the country’s lakes, rivers and estuaries.

Dr David Wall, a scientist with Teagasc (semi state run agricultural research, advisory and education organisation), says the lifting of milk quotas in 2015 has led to an expansion of the dairy sector. Contributing to this expansion has been low beef and sheep prices and higher dairy returns.

Wall says compared with other European countries the water quality of Ireland’s lakes, rivers and estuaries is overall fairly good. About 70% meet have ‘good status’ under the nitrates and water framework directives of the European Union, he says.

“Under these directives the EU has set a target that stipulates that all water bodies have to achieve at least good status by 2027. Our next monitoring period is 2021 and we are striving to have a trajectory of increasing status in that period.”

But Wall says there are challenges in achieving that, such as pollution from urban wastewater and agriculture, with phosphate and sediment from heavier soils and nitrates entering the waterways and groundwater from the free draining soils.

“That’s a big problem for our estuaries and we have a lot of receiving estuaries that are very sensitive to nitrates. There is a lot of pressure on the dairy industry now in increasing nitrogen levels and stocking rates on paddocks where there’s more nitrogen being used.”

Wall, who has twice visited New Zealand, says both countries have similar problems. He refers to a lot of collaboration between Teagasc and AgResearch and Massey University.

Both countries, with grass based dairy systems, must determine systems that will minimise damage to the environment, he says. Ireland has regulations preventing farmers from spreading manure and compound fertilisers or chemical manures during the winter.

“I’ve got a bit of a flavour of what you Kiwis are doing. We can look to NZ to see the path ahead to make sure we don’t make some of [your] mistakes or we can adopt some of the good things you have done.”

Wall says Irish farmers often drink the groundwater and so they are aware of water quality issues.

How to assist farmers

OPINION: Collectively we must support farmers to become sustainable.